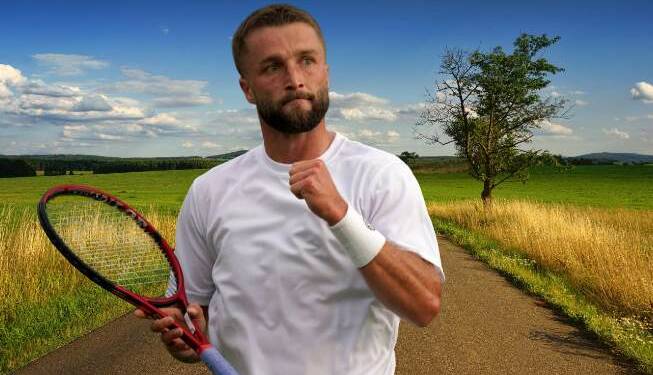 Liam Broady is a British No. 4 professional tennis player. He won the Boys’ Doubles at Wimbledon with Tom Farquharson and the Boys’ Doubles at the Australian Open with Joshua Ward-Hibbert in 2010, as well as reaching the finals of the Boys’ Singles at Wimbledon in 2011 and the US Open in 2012, peaking at No. 2 in the junior world rankings. In this article we are going to talk about the biography, career, notable works, games and family of Liam Broady so read the article till the end.

He is presently coached by David Sammel and competes on the ATP Tour. He was born on 4 January 1994, in Stockport, England, United Kingdom. He is the bother of tennis player Naomi Broady.

Broady began playing on the Futures Circuit in 2009, at the age of 15, in both singles and doubles. Broady won his maiden main draw singles match against Duncan Mugabe, a 19-year-old, at the GB F8 in Felixstowe in July 2009. Broady defeated four adult players on the Futures tour in 2010.

Broady advanced to the semifinals of the France F3 at Bressuire in February 2011. Broady and Dan Evans won their first doubles victory at the Chiswick GB Futures F11 in July 2011. In 13 of 18 singles competitions, he lost in the first or second round. Mark Hilton was Broady’s coach at Nottingham.

For ‘unprofessional’ remarks on a social networking site, the Lawn Tennis Association terminated his seventeen-year-old sister Naomi’s financing in 2007. Their father, Simon, was so upset by the decision that he pulled Liam, who was thirteen at the time, from the LTA program. To afford their travel and coaching, Simon sold the family house and downsized to a small red brick terrace.

The LTA offered to restore their money two weeks later, but Simon declined, and they continued to practice at the Mouratoglou Tennis Academy on the outskirts of Paris.

Broady returned to action after a long layoff due to the Coronavirus pandemic, reaching consecutive ATP Challenger finals and qualifying for the first round of the Miami Masters main tournament. As a result, Broady broke into the top 150 for the first time in his career, peaking at No. 137 in singles on April 19, 2021.

He competed in the 2021 Italian Open (tennis) in Rome with Andy Murray in a doubles partnership. They defeated Australians Max Purcell and Luke Saville in the first round but were defeated in the second round by Kevin Krawietz and Horia Tecau.

Broady, the younger brother of fellow tennis player Naomi Broady, grew up in Heaton Chapel, Stockport, with another sister, Emma, and a brother, Calum. Shirley and Simon, Liam and Naomi’s parents, took them to tennis competitions.

Broady began playing table tennis when he was four years old and took instruction at Matchpoint in Bramhall. By the age of eight, he competed in his first competition, and at the age of ten, he showed promise.

He went to Norris Bank Primary School and Priestnall School for his GCSEs, which he completed in 2010.

Broady’s decision to accept support from the LTA in 2012 caused him to become estranged from his father, and the two did not speak for several years. Liam stayed with his sister Emma when he returned to Manchester.

Broady stopped receiving LTA money in November 2015 to repair his relationship with his father, and he now supports himself by renting a flat in Manchester’s Heatons. Broady received his training at the Northern Tennis Club, David Lloyd Fitness, and Broadstone Mill Life Leisure. Broady played Davis Cup for Great Britain in the 2018 encounter against Spain, but Naomi Broady has declined to play Fed Cup for the country.

Are Liam Broady and Naomi related?

How old is Liam Broady?

How tall is Liam Broady?

We hope this biography article of Liam Broady will be helpful for you to understand his journey and works.