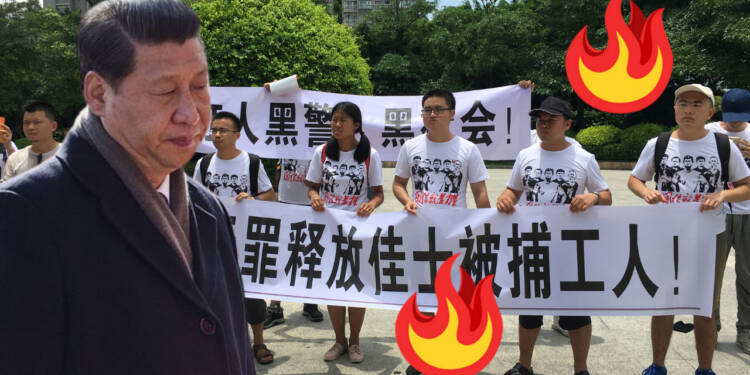 No matter how many years flew through, some images of the past stay intact in the cerebrum for shaping new ideas and cultures altogether. One such image that never left the chamber of anyone’s psyche is of the tank man. The unidentified brave who stood in front of the charging Chinese tanks leaving the Tiananmen Square on June 5, 1989.

Conflicting against the authoritarian regime in China, millions flooded into central Beijing in 1989 to voice concern regarding the ratcheting corruption, mismanagement, and nepotism. Students erected their ‘goddess of democracy’ statue opposite the communist revolutionary leader Mao Zedong.

To mitigate the effects of the protest, China did what China does. Tanks plunged toward the demonstrators’ ensuing arrests, executions, and exile. The image of the tank man thus became a powerful symbol of the contemporary world.

Interestingly, most of the 1989 pro-democracy protesters in China were students who marched in thousands echoing the call for democratic reforms. Straight to now, China is drowning back to 1989 as the students of Peking University are all on the streets against the strict covid-19 lockdown imposed by the government. A comeuppance for the Tiananmen’s square massacre.

The world is gleaming in the revolution of social media that help us share images and videos which helps read the happenings around the globe. Likewise, Videos started circulating showing the students of Peking university arguing against officials for not allowing them to leave college. More worries piled up with students not being able to order food inside the college campus. The videos surreptitiously made their way into the Chinese internet, got viral, and eventually ended up getting censored. China is a land of homogenized opinion. Any contrarian voice will get stifled, but this time it sparked a change.

Students of #PekingUniversity #BeijingUniversity protest against #COVID19 #lockdown . They actually pushed down the wall. The vice principal asks students to put down their phones to “protect Peking University”. In 1989, the students movement started from this university. pic.twitter.com/Y5coEBLwnu

Students in nature go vociferous when involved in a protest. After wrapping down the Tiananmen square with a brutality that received global condemnation, China has never seen an uprising of this sort and the hardest part is, its students again.

Peking university stands as a symbol of resistance. This was the same university from which students plagued the streets in central Beijing and Tiananmen to counter the authoritarian regime. Tiananmen is a topic taboo in China and the re-enactment of the present-day Peking protest won’t sit well with the ruling elites.

Further going the students chanted slogans against the measures, which had disproportionately affected students. In another clip, a senior school official promised to take down the wall and asked students to return to their dorms.

The megalopolis of shanghai has recently been more like a battlefield with strict imposture of zero covid policy that even took the China dove in Tedros to show condemnation. Military intervention is China’s typical pandemic response. The city has turned into a battlefield against the virus. More than curbing down the virus China loves curbing down the voices of dissent. But unlike in the past, the world will not stand oblivious to the happenings in China.