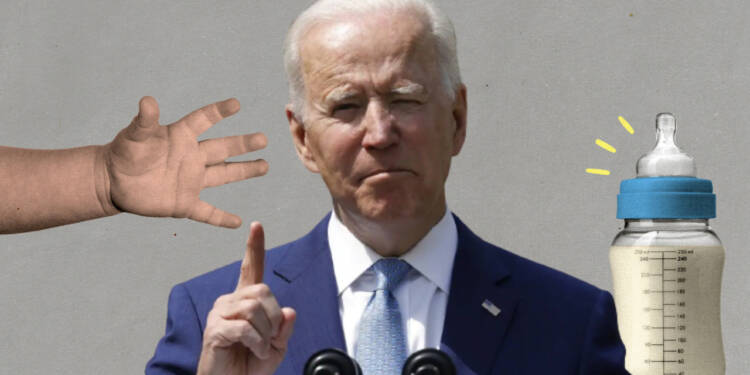 The United States, the world’s most populous and wealthiest country, is experiencing a lack of infant food. And all we have to blame it on is Biden. Parents around the United States are having difficulty finding infant formula, driving to local stores, and waiting for hours in order to feed their children. According to most experts, this is the biggest baby formula shortfall the United States has seen in decades. And this grave catastrophe is putting newborns’ lives in jeopardy.

As discussed in our previous article, the shortage is attributed to a contamination problem at an ‘Abbott Healthcare and Research factory that produces much of the Similac formula. The company had to voluntarily shut down the factory in February amidst consumer complaints about the contaminated formula that was linked to the death of two infants.

Read more: The Bill Gates connection behind the dire baby formula shortages in the US

Biden’s flying formula to get the baby formula

Though to ease the crisis, Biden has taken a move. Lately, President Joe Biden announced plans to send military aircraft to Europe—”Operation Fly Formula,” as the White House is calling it—to bring back a formula for American parents.

However, this is something that could have been accomplished without the use of special planes or aircraft. It’s not as if the United States is unable to obtain food supplies from Europe due to a lack of aircraft. The problem is that the US federal laws are currently so intricate that importing infant food in a timely manner is nearly difficult.

The Food and Drug Administration’s (FDA) rules are currently exceedingly complex. Many infant formulae developed in Europe are prohibited from being imported into the United States under the guidelines, not because of health or quality concerns. Those brands are frequently banned because they do not comply with FDA labeling regulations.

Also, there are huge tariffs imposed on these baby food formulas. This makes the imported formulas expensive and foreign players find it difficult to compete with the domestic players.

Nonetheless, the current shortfall of baby formula in the United States is mostly due to government policy failures aimed at shielding domestic industries from international competition. In fact, if Biden had been willing, he could have remedied the problem with a single click of his fingers. All he had to do was tweak the rules to fit the situation. “The EU exports enough infant formula to potentially supply the entire U.S. market,” “Had American families been free to import tariff-free formula from the start, the temporary shuttering of one U.S. factory would have been much less costly,” said Bryan Riley, director of the Free Trade Initiative at the National Taxpayers Union Foundation.