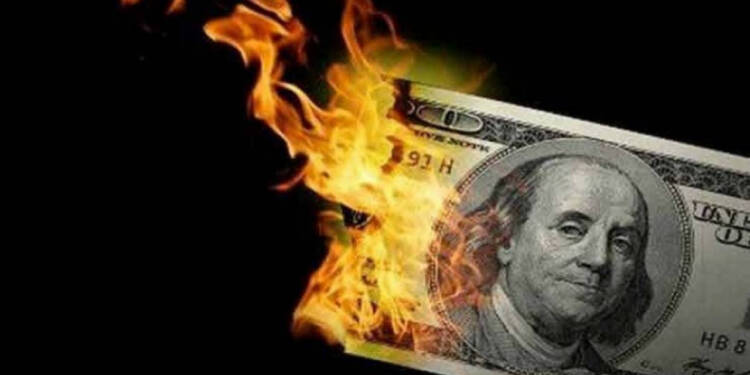 The U.S. dollar’s era is fast coming to an end. The U.S. dollar is no longer the world’s favourite currency. It never really was, but owing to the dollar’s position as a reserve currency, almost all countries swore by its supremacy. Now, the dollar’s single-biggest selling point is being brought into question – that of it being the undisputed reserve currency of the world. There are five signs that indicate that the U.S. dollar is staring at impending doom and that the United States of America might not remain the economic superpower it currently is.

What are these five signs, you might ask? ZeroHedge has published an interesting analysis, in which all these points were mentioned in great detail. Let me briefly mention what these signs of doom for the U.S. dollar look like.

After Russia launched the war in Ukraine, the Biden administration slapped an unprecedented number of sanctions on Moscow. Almost every sector and sphere of life in Russia was targeted. To make matters worse, Russia’s U.S. dollar reserves, stored by the Russian Central Bank, were seized by Washington.

The analysis noted, “The incident has eroded trust in the US dollar as the global reserve currency and catalyzed significant countries to use alternatives in trade and their reserves. China, India, Iran, and Turkey, among other countries, announced, or already are, doing business with Russia in their local currencies instead of the US dollar.”

The world now knows that the dollar reserves of no country are safe. That’s a big incentive for countries to dump the dollar as a reserve currency altogether.

Now, all buyers of Russian commodities, especially oil and gas must either make payments in rubles, gold, or bitcoins. There is no dollar in the picture. Russia is in the process of working out dollar-free trade with India, China, and several other countries. That represents a huge chunk of the world’s population not using the dollar for trade purposes.

That renders the dollar useless and redundant. Demand for the dollar will nosedive, and the currency will collapse. Even European countries – which are supposed allies of the United States – are complying with Russian diktats of using the ruble to buy oil and gas. This is what has made the ruble the best performing currency of 2022 so far, and also why it has remained immune to Western sanctions.

Since the dollar had become the world’s reserve currency by the 1960s and 70s, as well as the benchmark, crude oil transactions were undertaken using dollars. Oil was bought and sold using dollars. Oil is a basic necessity for humanity now. It’s what keeps the world running. So, by making all oil-related transactions dependent on the dollar, the United States was able to create a huge artificial market for US dollars.

But the decision of Russia to sell oil to Europe in rubles, and to China and India in Yuan and Rupee respectively, has raised eyebrows around the world. Now, China and Saudi Arabia are working out a mechanism where the Communist nation buys more than 25% of Saudi Arabia’s total oil output every year using the yuan, instead of U.S. dollars.

Just so that we’re clear, China is the world’s largest buyer of crude oil. So, the major economies of the world are now dumping the petrodollar system. Where will that lead the dollar as a currency? Down the drain.

Do you know how much money the United States of America printed during the Covid-19-induced panic that led to the markets slumping? A whopping $4 trillion. That was more money than the U.S had printed in 250 years of its existence. Just so you have the necessary perspective, the daily economic output of the United States of America is $54 billion.

Yet, the Fed was creating more dollars out of thin air than the economic output of the entire country. Now, inflation is soaring. The dollar will soon become cheap. It will lose its value due to a high rate of unaccounted circulation.

Sign No 5: The U.S. Admits the Dollar is Dying

The cherry on the cake really is the declaration made by Jerome Powell, the Chairman of the Federal Reserve. He now says, “It’s possible to have more than one reserve currency.”

That’s it. That’s the declaration. The man tasked with ensuring that no other currency challenges the dollar’s hegemony is now saying that having more than one reserve currency is not that awful an idea.

The days of the U.S. dollar dominating the world are, therefore, numbered.