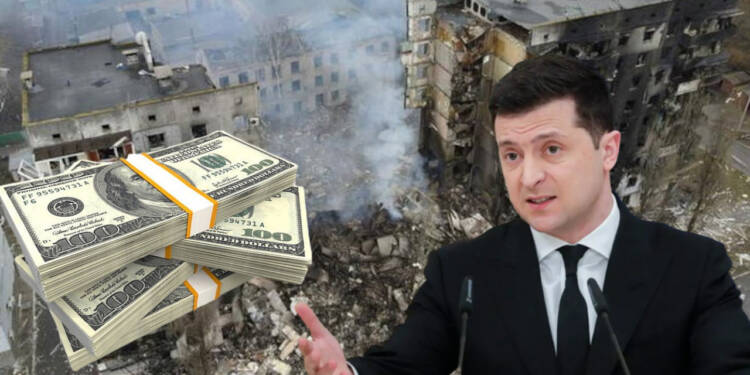 First, it was Poland asking for money from the European Union to pay for the expenses it is incurring every day due to the massive load of refugees that it has welcomed on its soil. Poland is all set to receive €144.6 million from the Asylum, Migration and Integration Fund of the European Commission. Ukraine, however, deals in big money. For historically antagonising Russia, acting as a proxy state of NATO, and committing crimes against ethnic Russians in Donbass, Ukraine is now demanding $5 billion from Europe on a monthly basis.

Essentially, Ukraine is demanding compensation from Europe for fighting a war that NATO has been inkling to wage for decades now. NATO came this close to physically fighting Russia during the Cold War, but no blows were actually exchanged between the two sides. America’s deep state and Europe’s war lobbies have ever since been trying to get on Russia’s nerves.

In recent times, they brilliantly used Ukraine to do their job. Now, Ukraine is getting ravaged. Kyiv realises how it has been used by NATO to wage a proxy-war against Russia, which Moscow is winning by the way. The only loser to emerge out of this war is Ukraine. It knows this, and now, it is demanding compensation from Europe.

In an interview with EURACTIV, the former Ukrainian economy minister and current advisor to President Volodymyr Zelenskyy, Tymofiy Mylovanov called for the use of grants instead of loans. Europe and international financial institutions are considering rolling out big loans to Ukraine with long repayment periods. However, such loans will be detrimental to Ukraine’s economy moving forward, which is why Kyiv is demanding that it not be given loans, and be provided with direct cash handouts instead that do not have to be repaid.

Ukraine, in its mind, thinks it deserves such payments for participating in a war that the West has always wanted to fight with Russia.

Last Monday, the EU Commission announced a proposal to increase the macro-financial assistance to Ukraine by €9 billion. Responding to this, Tymofiy Mylovanov said, “€9 billion sounds like a good amount, although it stops short of what is needed,” adding that Ukraine needed about $5 billion a month to keep going. He also made it clear that he was expecting the U.S. and others to pitch in as well.

As for the total amount of funds that Ukraine will need for the reconstruction, Mylovanov estimated that about $500-600 billion would be required, but he said this could be spread out over 10 years. Ukraine is demanding that a majority of such funding come in the form of grants and not loans.

Mylovanov said, “Giving loans instead of grants means that the Ukrainian debt to GDP ratio will increase, and rating agencies that look at this ratio will consider Ukrainian debt less sustainable…There will be less private investment but at a higher cost.”

Read more: China has created a trench between itself and Russia, and it’s going to end badly for China

The European Union, meanwhile, is adamant that loans will form the most crucial part of the Ukraine reconstruction effort, and that Kyiv will ultimately have to repay the money it is being given right now. According to the Guardian, grants and the proceeds procured from seized Russian assets will also be used for reconstructing Ukraine.

The EU anticipates that the cost of rebuilding Ukraine’s destroyed physical infrastructure alone would require more than $100 billion over the next decade.

Meanwhile, Europe is making it clear that if Ukraine wants this money, Kyiv must take “full ownership” over the reconstruction effort and that reconstruction would be linked to a reform agenda that should help Ukraine “align with EU standards.” Essentially, the EU is creating a client state out of Ukraine.

In the long run, this agenda will once again invite trouble for Ukraine, or whatever remains of it in the near future.