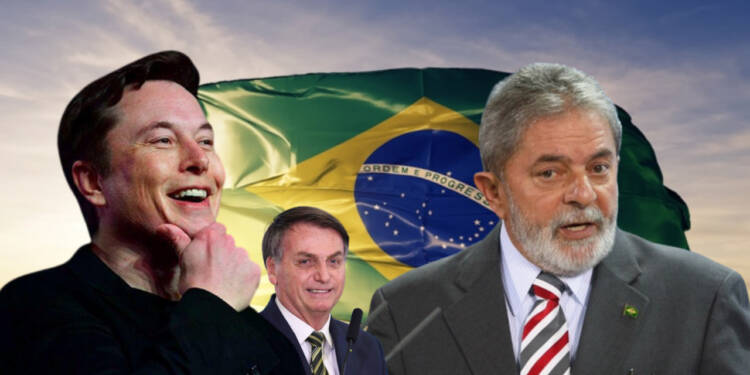 Allegations and scandals have been coming in torrents against Elon musk. After walking away with the glorious takeover of Twitter, the angry vortex of protest has seen an increase in velocity, mostly from the left and their acolytes. But Musk is achingly cool when it comes to handling criticism. The latest of his endeavour suggests the same. The business magnate and chief executive officer of SpaceX met with Brazilian president Jair Bolsonaro in Sao Paulo which has, in turn, made the liberal camp go sick in dismay.

Jair Bolsonaro, the far-right politician is a jilted figure for the liberal mass. Of late the incumbent president has been through a weakening economy, plummeting approval ratings, and the erroneous covid policy to fight for. With the opposition gaining momentum over the missteps committed by the Bolsonaro government, Elon Musk’s arrival in Sao Paulo weighs significance.

Bolsonaro is adorned with a sobriquet, Deforester-in-chief. The deforestation in the Amazon has been a beating box for the opposition and other like-minded politicians who loath Bolsonaro. Even the amazon saga invited celebrities to try a hand at intruding on the presidential elections in Brazil.

Bolsonaro is an ultra-right-wing who vociferously supported the military dictatorship of Brazil that ended nearly 40 years ago. So, with musk trying to build a genuine connection with the much-scorned leader, a new celebrity is taking the podium within the right-wing fan base.

Elon Musk’s overtures in Brazil are mainly concerned with giving a protective blanket to the breathing block of the world, Amazon.

“We count on Elon Musk so that the Amazon is known by everyone in Brazil and the world, to show the exuberance of this region, how we are preserving it, and how much harm those who spread lies about this region are doing to us,” Bolsonaro said.

The Brazilian president also took a divagation that was on the expected lines as he mentioned Musk’s takeover of Twitter. He said the Twitter takeover provided a “Breath of hope” and lauded the SpaceX CEO for his resoluteness in fighting the big fight. Bolsonaro back in the days accused twitter of being left-wing and protested vocally about the permanent ban subjected to former president Donald Trump.

The Musk visit to Brazil is sure to give a new angle to Bolsonaro’s pursuit of the top office. With just five months left for the highly anticipated elections, the billionaire’s visit is sure to align the tense elections according to Bolsonaro’s needs. The past week has seen the opposition candidate Lula getting back into the turf with a spike in approval ratings much to the dismay of the incumbent president. But the current spate of events holds optimism with the muti billionaire vowing to protect the Amazon putting an end to the long-debated issue. After all, Musk’s trip down south to Brazil seems like a well-curated one to boost the far-right dominance in the land of soccer.