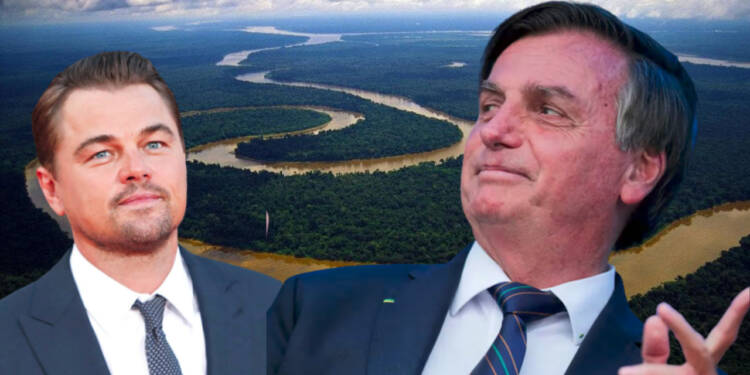 It is election time yet again, and therefore fake environmentalists and left-liberal activists are waking up from their slumber. This time they have a new target- Brazil’s Conservative President, Jair Bolsonaro.

However, Bolsonaro has hit back at one of such fake environmentalists, Leonardo DiCaprio by taking him to the cleaners. So, what just happened between Bolsonaro and DeCaprio? Let’s find out.

Despite media hype about Lula, Bolsonaro is winning Brazil

First things first, the fact remains that Brazil is set to go to polls in October this year.

Read more: Brazil’s right-wing ecosystem has collapsed and Bolsonaro is to be blamed for it

Bolsonaro will be seeking a re-election of his administration from 150 million Brazilians and he will be up against ex-President Luiz Inácio Lula da Silva.

Bolsonaro had faced harsh criticism after the COVID-19 Pandemic which claimed the lives of over 660,000 Brazilians. Liberal mainstream media had written him off after the Pandemic and the global criticism over Amazon rainforest fires.

However, in recent weeks, Bolsonaro’s ratings have improved and this has dashed the hopes of liberals. They were expecting that he will not even be in contest when Brazil goes to polls. But that is clearly not the case.

Read more: Bolsonaro comes out in open support of Putin to save Russia’s World Bank and IMF membership

Bolsonaro carries Brazilian nationalism on his sleeves. He also keeps Brazilians in confidence about safeguarding Brazil’s sovereignty and not selling away his country to external interests. This is why his support base is showing a lot of resilience. So, you see a lot of panic in liberal corridors.

Whenever anti-left values are on the rise in a democracy, we do see sudden activity by international activists. When India was witnessing farmers’ protests, for instance, there was a sudden upsurge in activity of foreign celebrities. Remember, even Greta Thunberg and Rihanna had tweeted about the protests, in a bid to undermine the Modi government in India.

This is the modus operandi of the global left- every time some nationalist leader comes to power, they start such propaganda.

In case of Bolsonaro, it is DiCaprio who tried to push the environmentalist agenda. He tweeted, “Brazil is home to the Amazon and other ecosystems critical to climate change. What happens there matters to us all and youth voting is key in driving change for a healthy planet..”

Brazil is home to the Amazon and other ecosystems critical to climate change.
What happens there matters to us all and youth voting is key in driving change for a healthy planet. For more on voter registration in Brazil before May 4, visit https://t.co/0mKrfxLdRR #tiraotitulohoje

Now, there was clear signaling at play- vote against Bolsonaro and save Amazon.

Bolsonaro however decided to give a dressing down to DeCarpio. Remember, the two do have a bitter history. In 2019, the Hollywood actor had donated $5 million for greater protection of the Amazon rain-forest. However, Bolsonaro had accused him of “giving money to set the Amazon on fire”.

This time around, Bolsonaro was at his sarcastic best. He replied, “thanks for your support, Leo! It’s really important to have every Brazilian voting in the coming elections. Our people will decide if they want to keep our sovereignty on the Amazon or to be ruled by crooks who serve foreign special interest. Good job in The Revenant!”

He then called out Dicarpio for apparently sharing misinformation on Instagram. The Brazilian President tweeted, “By the way, the picture you posted to talk about the wildfires in the Amazon in 2019 is from 2003. There are people who want to arrest Brazilian citizens who make this kind of mistake here in our country. But I’m against this tyrannical idea. So I forgive you. Hugs from Brazil!”

– By the way, the picture you posted to talk about the wildfires in the Amazon in 2019 is from 2003. There are people who want to arrest Brazilian citizens who make this kind of mistake here in our country. But I'm against this tyrannical idea. So I forgive you. Hugs from Brazil! pic.twitter.com/pSJBOjVSB7

So, Bolsonaro actually carved an opportunity to propagate himself as the best choice for the Brazilians ahead of the Presidential polls. And that too out of the coordinated criticism he was receiving from DiCarpio. This suggests how Bolsonaro is stream rolling towards a surprise victory, much to the chagrin of the global left.