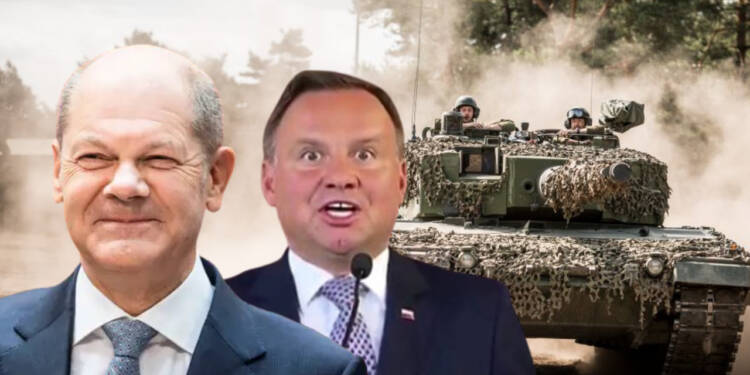 Poland has been making headlines after its Prime Minister Mateusz Morawiecki asked Norway to share its gas and oil profits. Moreover, its President Duda has been in news due to his crazy comments and approach to various EU issues.

Now, Duda has made a new set of comments and this one explains how funny the fight with European Union can become. Well, European Union has been continuously pumping its money and military inside Ukraine to continue its effort to counter Russia.

Poland has been actively participating in the EU’s war. But, Duda has expressed his concern over a deal with Germany that he believes could have been vital for Poland. Earlier getting discerned from Olaf Scholz for not visiting Kyiv, now Duda says that Olaf has betrayed him and his country.

On the call of Germany, Warsaw had handed over 240 Soviet-era tanks to the Ukrainian military in its war against Russia. But, there was a deal as Germany asked Poland to give tanks in exchange for new Leopard tanks.

Duda has expressed his grief over the delay in deliveries and accused the German government of breaking its word on the agreement to supply Warsaw with new tanks for compensating Soviet-era tanks given in Ukraine.

German Chancellor Olaf Scholz had introduced a scheme called “Ringtausch,” i.e. a swap scheme under which eastern NATO partners were called to supply the Ukrainian army with Soviet-era tanks like the T-72 in exchange for modern western tanks from German manufacturers, such as the Leopard.

Scholz and German officials have argued from time to time that this model could prove advantageous for Ukraine because it gets the same Soviet-era tanks that its soldiers and mechanics are already familiar with, while eastern NATO countries receive an upgrade.

In an interview with German news outlet Welt, Duda said that Berlin is refusing to send new tanks to replace the exported weapons. “They haven’t fulfilled their promise and frankly, we are very disappointed about this.” This was a translation supplied by Welt, the Polish president said on the sidelines of the World Economic Forum in Davos.

German officials believe that the disagreement with Warsaw could be related to Poland’s desire for better German tanks other than Leopard 2A4, which was sent to the Czech Republic,  manufactured in the late 1980s, and is now somewhat modified. But, Poland looks to be interested in more latest versions of the tank, such as the Leopard 2A6.

240 tanks are a large amount, so it is quite certain that Poland’s military has been depleted. On 26th April it informed Germany that it has provided tanks to Ukraine and looks forward to new tanks under ‘Ringtausch’.

Germany has averted back that it is “engaged in a constructive exchange with Polish allies to see how it can reconcile their wishes and our possibilities, But, there is still a bit of work ahead.”

Poland, it seems, requires a minimum of 240 or approximately comparable heavy tanks. However, because production takes time, deliveries take time. Poland is in a desperate situation.

Moreover, Chancellor Scholz was also attacked by Polish Prime Minister Mateusz Morawiecki for refusing to fly to Kyiv, saying he should have done so. Now, Duda is attacking Germany for its delivery delays.

Berlin has successfully implemented the “Ringtausch” with the Czech Republic, and under the swap system, Berlin will deliver 14 Leopard 2A4 main battle tanks and one Leopard tank recovery vehicle to Prague. However, Poland has a considerable high demand.

Offering 240 tanks or something close to that is a major task. Duda is clearly triggered by watching Czechs receiving benefits while Poland is waiting in line.

Turkey may not have money, but it does have a plan

Can dead bodies be bargaining chips? For Zelensky, they are