“China is the enemy,” Philippine Navy sends a tough message to the newly elected president 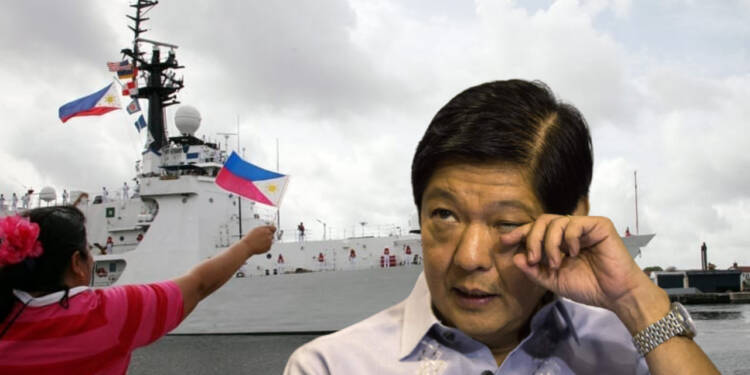 Robert Duterte, the China dove President is out of the Philippines Presidential office. But, his friend and one of the most prominent Filipino leaders, Bongbong Marcos Jr. is now President of the nation.

Now, with him becoming the next president, it is being anticipated that he will be the same as Duterte in approach i.e his policies will be influenced and beneficial for China. Most of the democracies in Southeast Asia are somehow influenced by China, but the military in these regions have anti-China sentiments due to land and water disputes.

The same goes with the Philippines, the military has shown many times the leaders of the state their power and stance against China. Now ahead of Marcos’s inauguration, the Filipino military has sent an indirect message to President that ‘China is the enemy’ and he must not forget it.

The South China sea is one of the most active hotbeds in the South Asia region. Now in a recent development, the Philippines has begun using ‘Subic Bay’ facing the South China Sea as a naval base, sending a direct warning to China. The country’s navy has stated that this move is aimed at countering China’s increasing assertiveness in the contested waters.

In addition, one of the Philippine Navy’s two guided-missile frigates was also deployed at the new base. The activation of this base is quite significant because the last time, the U.S. Navy withdrew from the strategic area about 80 kilometers west of the capital Manila 30 years ago.

This former naval base was turned into a casual port known as Subic Bay Freeport. But, due to the rising tensions in the nearby waters, Manila and Beijing are locked in a territorial dispute, and hence, the base has been re-activated. A few more Navy fleets may also move into the base “within the year” along with the US and Japan’s participation.

If you think that only naval exercises will take place in the port. No, the Philippine Air Force, also plans to station aircrafts at Subic Bay International Airport in order to monitor and respond to maritime disputes, according to a Subic Bay port official.

It has been known that the Philippine Military takes a harder stance than the government and has conducted many exercises going against the will of higher authorities.

For instance, the Philippine Navy themselves decided to send over 200 military men to the West Philippine Sea to execute patrols and protect fishermen. These fishermen have a long history of getting harassed by Chinese forces. The initiative was informed to the former president Duterte after completion.

Read More: A new dawn in Manila as Philippines looks to kick out China from the disputed South China Sea

Throughout Marcos’s campaign, it has been anticipated and indicated many times that his presidential term won’t be much different from China dove Duterte’s term. Bongbong Marcos Jr has himself said that he wants to pursue a strong relationship with China, while not abandoning the West.

China already expects that once Bongbong Marcos Jr has been sworn into the office, he will sideline the 2016 arbitration award that rejected Chinese claims in the South China Sea. And Beijing also expects Bongbong to back China’s line on international issues. This is where the military rushes into the spot.

The military has been hawkish toward China and does not want Beijing to capture any more islands inside the disputed area. Moreover, the military fears Bongbong Marcos Jr could turn Philippines into a ‘client state’ of China.

The military of nations in Southeast Asia dictates the foreign policy more than the country’s official government. Myanmar, Indonesia, and the Philippines are all examples of this.

Read More: The Philippines is doomed

After winning more than 59% of the votes in the latest election, Marcos Jr. is set to formally take office on June 30. But, the military has already raised alarm over his China Dove policies and has warned him of the consequences.

And trust us, Bongbong Marcos Jr has understood this message. Till now, he’s playing safe and has not taken any hardline decision that is favorable for China. Moreover, after the activation of  ‘Subic Base’, Bongbong has just announced that he will uphold the ruling of the South China sea. So, a continuous status quo is maintained by the President.