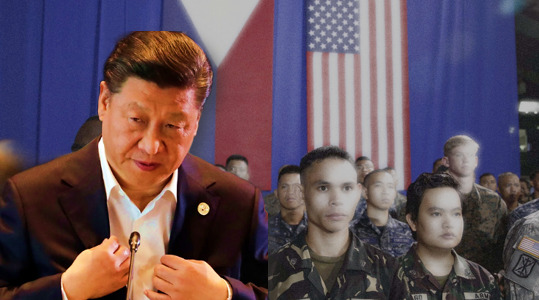 The Philippines and the US kick off their biggest joint military exercise in the disputed waters of the south china sea. The drills will showcase the strong defense ties between the two nations amid Beijing’s belligerence in the region. Thousands of soldiers from both nations are going to participate in the 12-day war game. The drills are likely to focus on maritime security, live-fire training, counter-terrorism, humanitarian assistance, and disaster relief. The exercise this year marks the 75th year of US-Philipines security cooperation.

Also read: As bizarre it may sound, China has a binding obligation to use nuclear weapons to protect Ukraine

The idea to hold the war game was threatened by the outgoing President Rodrigo Duterte. Since taking office in 2016, Duterte nurtured closer ties with China and Russia. China lured the Philippines in exchange for cheap loans and investments. Drooling over, Duterte, also slashed a key military agreement, Visiting Forces Agreement (VFA) with the US which would have facilitated US military presence in the region. But taking a retreat and scraping the earlier decisions, Duterte seems to have understood the importance the US-Philippines alliance holds in the contemporary world.

China’s aggressive and recurrent presence in the territorial waters with a terse response to the eminent international court ruling in the year 2016 engendered a shift in Duterte’s rationale. China always abjures overtly violent methods to preserve its maritime claims, especially in the South China Sea- a region rich in oil and gas and also one of the busiest trade routes. In wake of this, China has been establishing clout over different islands in the sea and has been involved in skirmishes with other nations. In a recent move, China fully militarized three islands in the South China Sea. The move directly threatens the sovereignty of all nations enveloped in the region.

Also read: A China-hawk president in the Philippines is a certainty, and things are about to change drastically

Therefore, the present military exercise between the Philippines and US can be considered an imminent move to counter China’s expansionist ambitions in the disputed South China Sea. It is a tremendous training opportunity for both countries and will invariably contribute to the peace and stability in the Indo-Pacific region. It would help both the militaries to respond to threats posed by China in no time.

At the opening ceremony in Manila, Philippine military chief General Andres Centino said the drills reflected the “deepening alliance” with the US.

“We are sending a message to the world that the alliance between our countries is stronger than ever,” Philippine Defence Secretary Delfin Lorenzana said in a statement.

Without a doubt, the traditional alliance of the Philippines with the US is requisite to counter the growing ambitions of China. But with the presidential elections due in the Philippines, the cue is that the upcoming leader will take along with him the same ideology to counter China for years to come.