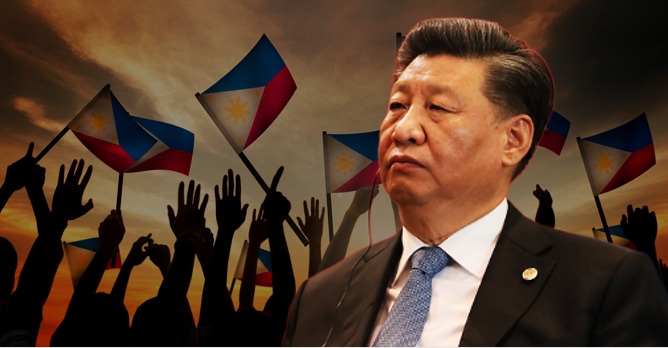 Malacañan Palace will see a next occupant in the coming months as election season edges nearer in the Philippines. And as it goes, The news may not bode well with the authoritarian masters in Beijing. President Rodrigo Duterte, who is known for his flip-flops on the China front is going to hang his boots and is going to be replaced by a fierce China hawk.

There are two main candidates in the fray- Ferdinand Marcos Jr and incumbent Vice President Leni Robredo. Both of them can be described as Duterte’s allies. But there is another similarity- both of them promise some strong anti-China measures despite their proximity to Duterte.

The story of Philippines’ struggle against China- one step forward, two steps back

Manila’s struggle against an increasingly belligerent China started in the 1990s. This period saw China staking bold claims on the South China Sea with the Philippines putting up a minimum deterrence towards a rising China.

Philippine leaders were confused. They were off the mark on how to balance out their interests in the context of a traditional alliance with the United States of America and a rising China. Gloria Macapagal Arroyo, the Philippine President from 2001 to 2010, for example, upheld Manila’s alliance with the US but also sought Chinese trade and investment deals.

He was succeeded by Benigno Aquino III, who tried to confront an aggressive China. Aquino was the one who helped the Philippines win the famous international arbitral award, denouncing China’s South China Sea claims in 2016. However, Aquino also lost Scarborough Shoal to the Chinese in 2012 and the arbitral award went ineffectual.

Aquino was succeeded by Duterte. And this is where the Philippines’ story of one step forward, two steps back materialized.

Duterte came to power on the premise of fighting Chinese belligerence. But after coming to power, he started securing Chinese investments and canceling key security mechanisms with the US like the 2014 enhanced defense cooperation agreement and the 1999 visiting forces agreement (VFA). Suddenly, it seemed that the US would no longer be able to position its military equipment and troops in the Philippines deterring the Chinese armed forces.

Read more: The Great Filipino flip-flop: Swinging between pro-China and anti-China, is Duterte confused or is he a plain genius?

Yes, Duterte did swing towards the US at times, including with the decision to reinstate the VFA last year. The Philippine military and diplomatic establishment too made it a point to retain ties with Washington despite Duterte’s occasional outbursts against Washington. But the era of flip-flops in Manila has only strengthened Beijing. Duterte more often held the opinion that a militarily weak Philippines should appease Beijing rather than opposing.

Read more: Frigates from South Korea and BrahMos missiles from India, Philippines is getting serious

China hawk to assume office in the Philippines

A China hawk will be assuming office as the next President of the Philippines. Firstly, no one can win the upcoming Presidential polls without laying down tough policies against China. A 2019 survey found that 93% of Filipinos wanted to regain control of China-occupied islands in the South China Sea. So, it’s for sure that anti-China sentiment is picking up pace in the Philippines.

This is why the frontrunner in the polls, Ferdinand “Bongbong” Marcos Jr, has called for a Filipino military presence in the South China Sea. He says that it will help Manila defend its economic rights. Rodrigo Duterte’s eldest daughter is Bongbong’s running mate. Yet, he is promising enhanced Filipino military presence, which really shows how anti-China sentiment has surged ahead of the polls.

Once, they get elected, they will also get rid of Duterte’s baggage and pursue a more independent and hawkish policy against China. Ultimately, the Filipino government and the Filipino military will agree on a key issue- confronting the security threat posed by China and prioritizing security interests over economic cooperation with Beijing.

The US and other Quad countries thus have a chance to ramp up their presence in the Philippines. We know one thing for sure- no matter who becomes the President of the Philippines, he or she will be a China hawk and it seems like the days of Filipino flip-flops on the China front are over.