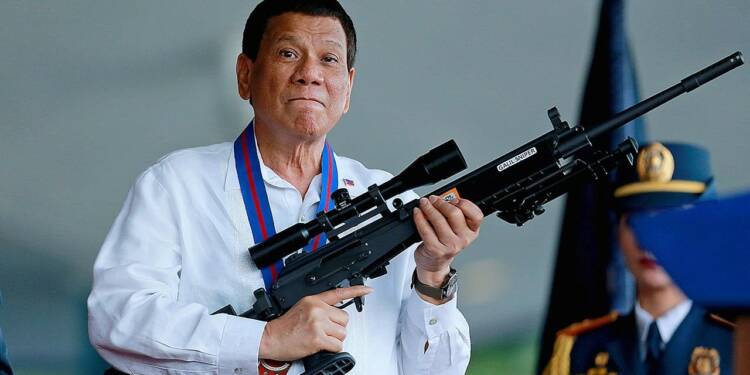 President Rodrigo Duterte has proven to be an unmitigated disaster for the Philippines, who has steered the country increasingly towards China, thus compromising heavily on Manila’s national security. Today, China is locked in a tense maritime standoff with the Philippines, yet Rodrigo Duterte cannot stop singing the praises of China like a canary. He is, in fact, vouching for stronger ties with China, since according to him, the Philippines is no match for Beijing and its armed forces. Under Duterte, things have gone from bad to worse for Manila. But there is a silver lining on the horizon now. Duterte has announced his retirement from politics, which means he will cease to be President in June 2022.

Rodrigo Duterte was a vociferous China hawk until he got elected as President, after which he reduced himself to a Chinese stooge. He strategically alienated and antagonised the United States and pulled out of bilateral agreements with the Philippines’ most important partner.

In his final state of the nation speech in July, Duterte even suggested that he was proud of sticking to his conciliatory stance towards China. The outgoing President diligently asked, “Do you want war against China? Well, I’ll tell you, even on the coast beach of Palawan, before you can take off, the missile of China would be there in about 5 or 10 minutes.”

Rodrigo Duterte has really made an image for himself as one of the worst world leaders, who turned the Philippines into a coward nation. It must be remembered that one of the first nations which China targeted in the South China Sea was the Philippines. It was really a testing ground for China. Having succeeded in bullying it over the past many years, today, China has grown belligerent against almost every South China Sea and ASEAN nation. And this will remain Duterte’s cross to carry.

Although the Duterte administration makes anti-China comments, they are usually only lip service. When Chinese vessels enter Philippine waters, such remarks are usually intended to serve as deterrents. Duterte very much intends to keep his China “pivot” alive. Duterte has been hesitant to approach China over the South China Sea dispute for a long time now. In fact, he appears to be on the verge of quitting. He even said, “China is a good friend. We owe them a debt of gratitude—a lot, including our vaccines.” Continuing his defeatist remarks, Duterte added, “So China, let it be known, is a good friend, and we don’t want trouble with them, especially a war.”

Rodrigo Duterte is infamous for making maniacal statements which put the Philippines’ future at peril as a whole. At a Press conference in 2016, Duterte had declared, “Hitler massacred 3 million Jews … there’s 3 million drug addicts. There are. I’d be happy to slaughter them.” But that was not all.

Referring to US President Barak Obama, the Filipino President said “Son of a whore, I will curse you in that forum.” The remark had led to ties between the two Presidents going into a deep freeze, and Obama refusing to visit the Philippines. China saw an opportunity here, and swooped in to co-opt Duterte, which proved to be a rather easy task. However, the Philippines’ fortunes were heavily compromised as a result of the same.

Duterte’s ties with former President Donald Trump were also not extraordinary. Duterte could have leveraged the Philippines’ position against China to extract good deals from the Trump administration. Yet, he did not.

Countries like the Philippines have become breeding grounds for Chinese nationals setting up drug production facilities and getting involved in the illegal trade of highly addictive narcotics. Since he took power, at least 8,000 suspected dealers and addicts have been killed in police operations. These are just official numbers, although activists and independent groups claim the number could be much more. These numbers are not at all reliable, and the International Criminal Court seems to agree.

The International Criminal Court on September 15th authorised an investigation into possible crimes against humanity of President Duterte’s much-publicised war on drugs. The ICC complaint estimated a far higher death toll of between 12,000 and 30,000 than the official tally, of 6000, given out by the government of the Philippines. The ICC probe will be extending back to as early as 2011, when Duterte served as mayor of Davao and ran a campaign of killings carried out by vigilantes, dubbed the Davao Death Squad, something that he is accused of having replicated on a national scale when he became President.

Rodrigo Duterte’s war on drugs has really had no regard for human rights or fair judicial trials. He has, in complete contravention of all laws, given rise to a hit squad specifically meant to kill anyone even suspected to be dealing drugs.

How the Philippines’ Defence Establishment Saved the Country

Taking a polarly opposite line than that forwarded by countries like Indonesia and Malaysia, the Philippines has extended its wholehearted support to the recently announced AUKUS alliance between Australia, the United Kingdom and the United States of America. Duterte was beginning to serve China’s interests as President. However, the Philippine defence establishment has ensured that its ties with the US military and Pentagon continue to flourish.

Read more: China finally wakes up to the Philippines, a challenge in its own backyard

For as long as Duterte spoke, he imperilled the USA’s ties with the Philippines. In July, the Visiting Forces Agreement between the two countries was extended, despite Duturte’s stern opposition to the same. However, the country’s defence establishment showed him his place, and now, he is seldom seen talking publicly. The Foreign and Defense Ministries of the Philippines are practically running the country, and Duterte has been side-lined. Now, Rodrigo Duterte is seldom seen speaking publicly.

Rodrigo Duterte has gotten away with his crimes and behaviour for far too long now. Now, with a new president incoming, Duterte is headed for trouble. Especially, if a leader who opposes Duterte and his policies from their gut comes to power in the Philippines, the current President could end up facing criminal action for his deeds. Retirement from politics in no manner suggests that Duterte will be let off the hook. If a decisive leader rises to power in the country, Duterte could face the prospect of landing in a lot of trouble, rightfully so. His actions seem slated to get back to him soon.