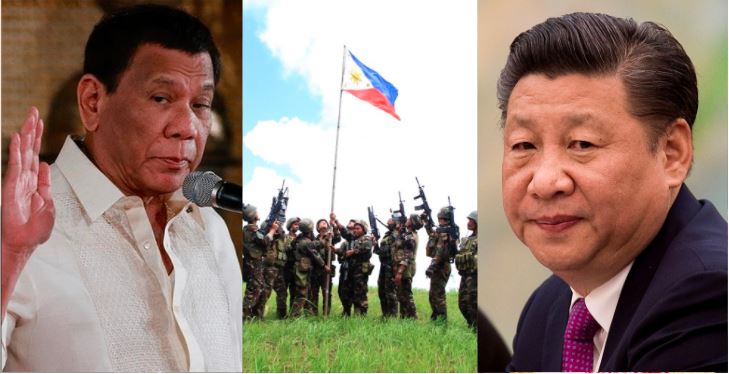 President Rodrigo Duterte of the Philippines rode to power in 2016 banking on his vivid anti-China rhetoric. The past five years of his presidency, however, have led to a depreciation of bilateral and diplomatic ties between the Philippines and the United States. It has been Duterte’s concerted effort to toe China’s line on all issues, almost always at the expense of the Philippines’ security. However, according to the Philippine constitution, a President can only serve one term spanning six years in office, after which he or she would be constitutionally required to step down. Guess who knows this the best? The Philippines’ defence establishment.

It is, therefore, no surprise that the Philippines’ defence establishment, comprising of the military and top security officials find themselves at odds with their country’s president. Yet, they all know that Duterte will be retiring next year, and therefore, they are doing all they can to preserve ties with the United States of America. Rodrigo Duterte was a vociferous China hawk until he got elected as President, after which he reduced himself to a Chinese stooge. He strategically alienated and antagonised the United States and pulled out of bilateral agreements with its most important partner.

However, the Philippine defence establishment has ensured that its ties with the US military and Pentagon continue to flourish. In line with the same, Philippine Foreign Secretary Teodoro Locsin Jr tweeted last month that ongoing negotiations to fully restore the all-crucial Visiting Forces Agreement (VFA), which was abrogated by Duterte over US criticism of his rights record last year, are “almost done.” The all-important VFA paves the way for the large-scale entry of US troops on Philippine soil.

In order to please China, Duterte had abrogated the same. Interestingly, Duterte is the same man, who during his election campaign, had pledged to ride a jet ski to the Philippine waters in order to fight the Chinese. Now, however, being the master of flip flops that he is, Duterte has said that his promise was a “pure joke” and that those who believed it were “stupid.”

Only recently, Duterte, while appearing to take on China, had exclaimed, “You can kill me but here I stay, this is where our friendship will end.” Most recently, however, Duterte has issued a gag order which bars members of his cabinet from talking about the South China Sea in public. This, after many of Duterte’s ministers, took an explicitly anti-China line. Needless to say, it has been proven beyond all reasonable doubt that the Philippines President can only issue anti-China statements, but when it comes to walking the tough talk, he squirms out.

Therefore, the defence establishment and military of the Philippines have had to take matters into their own hands. They are very well aware of China’s predatory ambitions and realise that the United States is their best shot at trying to ward off a Chinese invasion. So, irrespective of Duterte’s love for China, the Philippine military is going ahead and strengthening its ties with their counterparts in America. There are many reasons why the military establishment of the Philippines is keen to retain its strong ties with the United States. First, the Philippine military benefits from regular training and capacity building exercises with US forces. Washington has delivered US$765 million worth of military aid to the Philippines since 2015, making the country the largest recipient of US military assistance in the Indo-Pacific region.

Secondly, the United States enjoys unprecedented support among the Filipinos. Almost 60 per cent of Filipinos see the US as the Philippines’ most trustworthy partner, while they all seem to view China as the biggest threat to their country. According to the Asia Times, on at least two occasions, in last June and November, the Philippine defence establishment managed to postpone the abrogation of the defence deal with the US by citing, among others, China’s moves in the South China Sea.

In October last year, the Philippine Navy decided to send over 200 militiamen to the West Philippine Sea to execute patrols and protect fishermen who have long been harassed by encroaching Chinese forces. Here too, the initiative was taken by the Philippine navy and not the president. In fact, Rodrigo Duterte has been quite unabashed about his indifference towards the woes of the Filipinos. Last month, the man made clear that his administration has no intention of taking action to confront China’s maritime militia and is “not so much interested now” in the interests of Philippine fishermen.  He remarked, “I’m not so much interested now in fishing. I don’t think there’s enough fish to quarrel about.” This had infuriated fishermen in the Philippines, rightfully so.

Read more: The Philippines’ latest actions show that it has realised that China is a bully who can only talk

Almost all of Duterte’s lieutenants are anti-China, with the most vociferous of them being none other than the defence minister, who has never shied away from thrashing China left, right and centre for its belligerence and land grab machinations.

If today, the Philippines is standing as a free nation, it is courtesy of the country’s military and defence establishment. Had they toed Duterte’s line and gone pro-China in their approach while abandoning the United States, the Philippines would have become a vassal state of the paper dragon by now. With the ongoing Whitsun Reef standoff, the Philippine military has sent a clear message to China – that it will continue to defend its nation even if Duterte plays fool.

With the revival of the Visiting Forces Agreement just around the corner, the Philippine military has achieved an unprecedented feat. It has shown to the world, and China specifically, that it is capable of maintaining independent ties with countries like the United States of America and its defence forces even if the top political leadership of the two nations refuse to see eye to eye. Perhaps this a new model of military independence which could be followed by countries around the world, so that their strategic interests are not fidgeted with by a change in the country’s political guard.

Israel-Gaza war: Iran had the opportunity to get sanctions lifted but Netanyahu had other plans