“You can kill me, this is where our friendship will end”, a defiant Duterte tells Xi Jinping 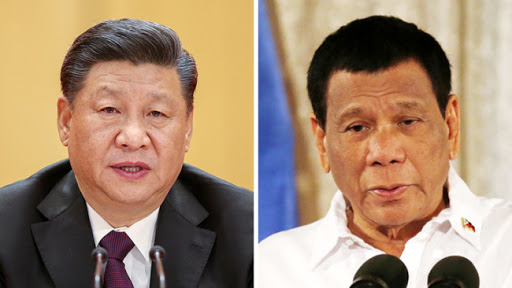 President Rodrigo Duterte of the Philippines has rejected China’s request to withdraw vessels from disputed South China Sea regions, vowing not to step an “inch backward.” In defiance of the months-long presence of hundreds of Chinese vessels it claims are staffed by militia, the Philippines has increased its presence in disputed areas of its exclusive economic zone (EEZ), including Thitu Island, near a Chinese military base.

Duterte’s comments in a televised address on Friday come as pressure mounts on him to abandon his pursuit of near relations with China and stand firm against what his defence chiefs describe as blatant provocations. Manila announced plans to establish a logistics centre in Thitu, the Philippines’ second largest island in the Spratlys group, known as Pag-asa. On the island, the hub will enable Philippine naval units to refuel and replenish.

The Philippine military and coastguard have also increased maritime patrols and announced plans to install surveillance cameras in some areas. Last month, China warned Manila to “avoid acts that complicate the situation and escalate disputes.”

In his recorded talk, Duterte said: “We have a stand here. And I want to state it here and now again, that our ships that are on Pag-asa and elsewhere, we will not move an inch backward. You can kill me but here I stay, this is where our friendship will end.”

He was apparently responding to criticism that his administration’s close ties with China had allowed Beijing to repeatedly encroach on the Philippines’ exclusive economic zone (EEZ). Duterte declared his intention to “separate from the United States” – the Philippines’ traditional ally – in favour of China when he took office in 2016. In return for trade and investment with China, he said he was “setting aside” a Philippine win in an arbitration dispute over the South China Sea brought before an international court.

Last week, he was chastised for claiming that the 2016 award was just a “piece of paper” that he might throw away. However, he said in his televised address that he “believes in the entirety” of the ruling. The strategy, according to a high-ranking government official who did not want to be named, is to “develop friendly ties with China while asserting Philippine sovereignty.” It’s a combination of cooperation whenever possible and pushback when necessary.”

“Above all, I don’t want to fight China; we have a deep debt of gratitude,” Duterte said on television. Critics argued that the president’s remarks should be taken with a grain of salt. Duterte said this week that a campaign pledge to jet-ski to the disputed region with a Philippine flag was a “joke” and that those who believed it were “stupid.” Whitsun Reef, another disputed aspect, was not included in the country’s EEZ, according to his spokesman, Harry Roque.

Senator Risa Hontiveros chastised the president’s office for making “defeatist statements” in a statement released on Friday. “Why is it that the palace speaks as if it’s a defeated party? They should stop it, because China is the only one enjoying this and benefiting from it. Maybe the reason why they won’t pull out the 200 ships they have in the West Philippine Sea is that they hear what the palace has been saying.”

The president has said on many occasions that opposing China’s claims in the South China Sea would be foolish because it would lead to a war; more recently, he said that China controlled the West Philippine Sea, which is Manila’s EEZ. But the latest statement suggests that Duterte is ready to snap relations with China over the region which has been a source of contention between almost all the states in the region.

Hamas’ attack on Israel has little to do with Israel. It’s about removing Abbas and taking over