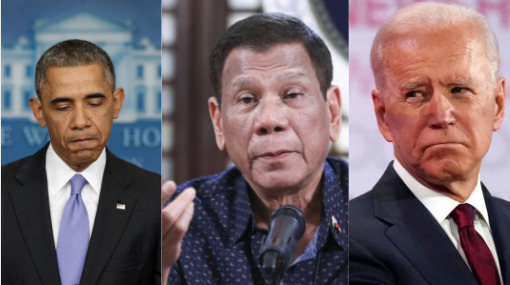 Philippines President Rodrigo Duterte understands that his country sits in a strategic position. And he loves using this strategic vantage point for swinging between two big giants- the US and China. However, his latest act of flip-flopping has landed US President Joe Biden in a diplomatic soup.

Manila and Washington are longstanding allies and their relationship is often defined by the Visiting Forces Agreement (VFA), which authorises American troops participating in joint military drills to enter the strategically located nation without passport or visa. But now, Duterte has asked Biden to explain the controversial US role in the 2012 Scarborough Shoal standoff between the Philippines and China, if the US President wants to keep the VFA intact.

The 2012 Scarborough Shoal standoff that Duterte is talking about is a living reminder of then US People Obama’s weak leadership and strategic failures. At that time, Chinese and Filipino vessels were locked in a tense stand-off in the Scarborough Shoal in the South China Sea.

The said geographical feature was being illegally claimed by Beijing, at which point the Obama administration intervened and brokered an agreement for both the Chinese and Filipino vessels to withdraw from the disputed feature. This was the first sign of Obama’s weakness. China was the aggressor in this case and the US ought to have order out Chinese vessels rather than brokering an agreement.

Anyhow, Filipino ships withdrew following the Obama brokered agreement but the Chinese vessels stayed put and even today, the Communist nation holds de facto control of Scarborough Shoal. Even after the Philippines secured an ICJ award in its favour, which the paper Dragon disregarded, Obama maintained Zen-like silence on the matter.

So, Obama gave away Scarborough Shoal to China on a platter. This was interpreted as a hurtful breach of trust in Manila and shortly after coming to power, Duterte expressed his frustration by calling Obama a “son of a whore”. Duterte, who unsurprisingly carries the ultimate ‘bad guy’s’ image in the Philippines, continues to hold a deep grudge over the Scarborough Shoal fiasco which is why he is still urging Biden for an explanation.

About reconsidering the VFA, Duterte said, “The VFA now is the problem. We have a big problem because America served as the broker and we withdrew. Why did they not force China to withdraw also? Unless they can explain it to me in a very simple way that can be understood by the entire Philippines, then I can begin to talk about their foreign forces.”

However, Duterte’s demand is actually a diplomatic nightmare for the US President. Biden may be at the helm of affairs in the US but he never really came out of the shadow of his former boss, Barack Obama. So, if Biden actually explains or rightfully apologises for failing to help the Philippines in 2012, he would be practically vilifying Obama and that would be politically catastrophic for the incumbent US President.

On the other hand, if Biden doesn’t explain the 2012 blunder, then the VFA could slip out of Washington’s hands, which would amount to an unpardonable blunder. Biden cannot simply sacrifice the VFA either, because the pact has been in force for over two decades and since the Philippines serves as an outpost close to China, no US President would want to lose easy access to the Southeast Asian nation.

Read More: Rodrigo Duterte is losing Philippines and only his love for China is to be blamed for it

The VFA already stands on thin ice as the Duterte administration had apprised the US of its intent to revoke the pact in February 2020 and it survived only because Duterte suspended its termination on June 1 last year. Later in November 2020, the suspension of VFA termination was extended by six months. But now the fate of VFA is likely to be decided for once and for all.

What puts Biden in an even tighter spot is the fact that Duterte plays foreign policy neutral. Sometimes, he is found pivoting towards China and at other times, he sticks with the US. Duterte swings towards the side that gives him more benefit.

Biden isn’t getting away easily and if he really wants the VFA to survive, the Philippines President won’t do it for free. Biden will have to pay a price, and the price that Duterte is demanding is an admission that Obama went awfully wrong during the Scarborough Shoal standoff in 2012.