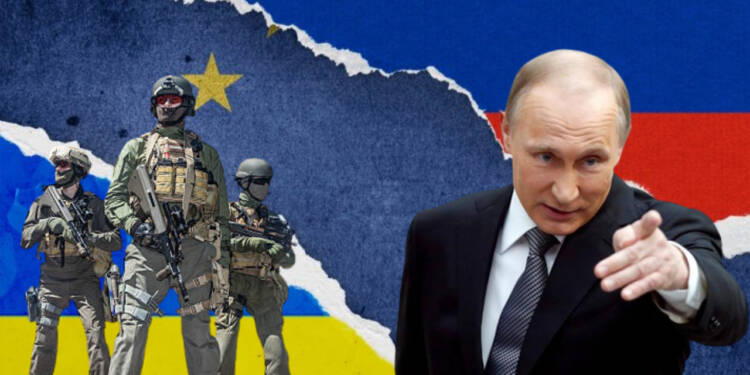 Crossing the Rubicon: It’s an idiom that comes from an allusion to the crossing of the Rubicon by Julius Caesar in early January 49 BC. His crossing of the river precipitated Caesar’s civil war, which ultimately led to Caesar’s becoming dictator for life.

Now, the European Union is close to crossing its own Rubicon in the Black Sea, which can very well precipitate a military conflict with Russia. And much to Europe’s chagrin, the ending of this conflict would be far from what Caesar experienced.

The Kyiv Independent, a state-backed propaganda outlet based out of Ukraine, recently reported that EU is mulling over launching a naval mission in the Black Sea to unlock food reserves sitting in Ukrainian ports and bring them to Europe. Such an initiative would require the European armada to impede Russia’s blockade in the Black Sea, perhaps through military means, which can also trigger a World War-like situation in Europe yet again.

According to El Pais, the EU will discuss the growing risk of famine in countries dependent on Ukraine’s agricultural exports, blocked by Russia, during a summit on May 30.

The final decision on setting in motion such a bold naval campaign by the EU could be made on May 30, when the bloc would gather to discuss the growing risk of famine in several European countries.

Make no mistake, Russia has weaponized Ukraine’s food supplies to Europe to exact political advantages from the EU. Russia’s Navy has had a more successful campaign than the Russian ground forces. It managed to close off the Sea of Azov and assume control of the Black Sea. This has resulted in a blockade sealing off Ukrainian shipping traffic and establishing a platform for the Russian Navy to launch assaults against Ukraine.

Ukraine is one of the world’s biggest food grain producers. And naturally, grain exports constitute the main exports of Ukraine. Yet, the Russian Navy’s blockade has halted Ukrainian grain exports and has further pushed up global food prices. Today, around 20 million tonnes of grain are stuck inside Ukraine.

But there is no route to transport them to other parts of Europe. Before the war, 90 percent of Ukrainian food exports took the maritime route, at a rate of 6 million tonnes per month. But today, around 80 of the world’s merchant ships are stuck in Ukrainian ports. Some of the ships have even come under Russian fire and therefore the maritime route is effectively closed for Ukraine.

All in all, for Europe to get its hands on Ukraine’s food reserves, it must first get Russia’s approval. But Russia is adamant about pressing the EU to get some sanctions removed from itself in return for establishing a food corridor between Europe and Ukraine. So, Russia’s offer is simple: Lift sanctions from our economy, and get your food reserves filled up to the brim.

And interestingly, Germany is now considering accepting Russia’s offer! A high-ranking Berlin official told the media that the proposal was realistic. The official said, “I think that in order to lift anything [such as sanctions], we would not rely on the [Russia’s] promises – we would need to see something happen on the ground first – this is where the complexity of the matter lies.” For Berlin, ‘sanctions on Russia’ is no longer the biggest issue, but the stability of food supplies is.

In any case, if the efforts of clinching a ‘food truce’ with Russia fall flat, the EU could be forced to activate its plan B—to launch a naval mission to unlock Ukraine’s food. But given Russia’s strong position in the Black Sea, it could very well turn out to be a suicidal move for the European Union. However, the chances of EU really fighting militarily with Russia in the Black Sea remains low. Germany and France have been pressing for diplomatic solutions to the conflict. So, it’s highly likely that Europe would eventually agree to lift some sanctions from the Russian economy to make the establishment of a food corridor across the Black Sea a reality.