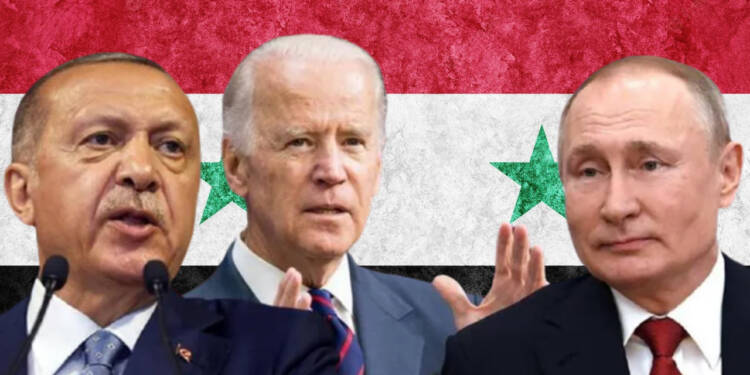 Northern Syria has been the battleground for various countries and factions. US, Russia, Turkey, Iran, and Kurds have all tried to gain dominance over the region. The quagmire seems to be aggravating as Turkish President Recep Tayyip Erdoğan vowed to eliminate “terrorism” in Northern Syria.

Pledging the attack in Syria, Erdogan said, “Like I always say, we’ll come down on them suddenly one night. And we must.”

But now Turkey has changed its stance. What made Erdogan backtrack his position? Let’s find out.

The things started to heat when a report of Russian soldiers leaving Syria emerged. The report said Russia has begun the process of withdrawing some of its troops in Syria to help bolster its forces in Ukraine. According to another report by an independent Dutch newspaper, several military units were relocated from bases across the country to three unnamed Mediterranean airports, from where they will be transferred to Ukraine.

Relaxation of sanctions by US

Capitalizing on the report, in the second week of May, US Treasury Department removed Caeser sanctions in Northern Syria. The move was explained as a green light for foreign investment in the areas of agriculture, information and telecommunications, power grid infrastructure, construction, finance, clean energy, transportation and warehousing, water and waste management, health services, education, and manufacturing, and trade.

It was a move, the US said, for the youth to be protected from the ISIS ideology. However, relaxing the sanctions will inevitably embolden the rival factions of Assad regime like Kurdish People’s Defense Units (YPG) leading to further devastation in already devastated Syria.

In the midst of all this, the Turkish President was diverting his own population’s attention by using Syria as bait. He has continuously asserted that Turkey will be undertaking military actions in Northern Syria.

Erdogan didn’t mince his words in going all out against the US as well. “All coalition forces, leading with the US, have provided these terror groups a serious amount of weapons, vehicles, tools, ammunition and they continue to do so. The US has given them thousands of trucks,” Erdogan said.

He also undermined America’s stand in the war against terror. “If the US is not fulfilling its duty in combating terror, what will we do? We will take care of ourselves,” he declared.

After winning Mariupol, Russia’s win in Ukraine seems very evident. It will soon take over Donbass and will turn Ukraine into land-locked country. As the result seems obvious, Russia’s focus is back on Syria. It has now deployed heavy military equipment on the Turkish border.

Russia’s foreign minister Sergey Lavrov on Thursday stressed that Moscow will continue to support the Syrian leadership on the issue of the full restoration of its territorial integrity.

However, another report talking about a meeting between Turkish military commanders and leaders of armed groups backed by Ankara has surfaced. The report said that Turkey has no plans to launch any type of armed operation in Syria. It also emphasizes that no particular time has been decided as of now.

So, what’s behind this sudden change in Ankara’s Syria policy? The answer is Russia’s reentry in Syria and the possible sanctions from the United States. Turkey didn’t expect any of the two nations to take notice of its sinister plans for Syria. But turns out, this adventure could very well backfire on his regime. So, the Turkish administration is now behaving wisely and walking back on its bellicose statements.

Furthermore, Erdogan’s statements can also be seen in the light of his opposition to the inclusion of Sweden and Finland into NATO. Turkey may use ‘Syria’ as a bargain chip in the whole issue. It is trying to extract weapons and aircrafts from the USA. The statements will also test who will actually support Turkey’s move in Europe.

The statements of Erdogan have zero practicality. Turkey can’t afford a military move on Syria. If it dares to commit the blunder, it is bound to deteriorate its already slowed economy and will result in a major increase in inflation and also a declining currency.

The problems will be multiplied with the US putting more sanctions on its economy and making a hell of its condition. And with Russia back in the picture, Turkey stands no chance.

Finland says joining NATO a strategic success. But there is a problem