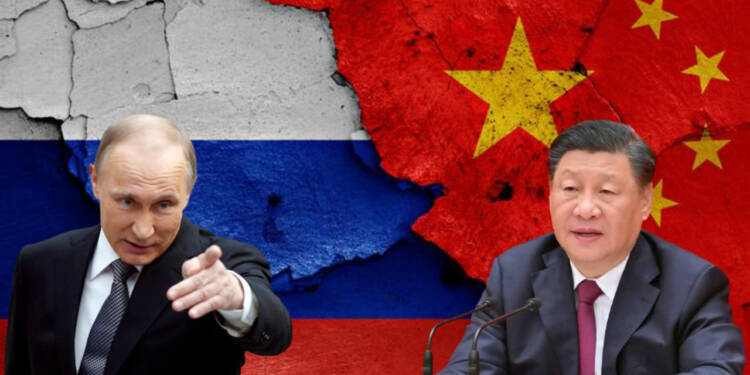 Russia and China are best friends, right? Well, that is what the media wants you to believe. That story is concocted in order to not single-out China as the only big evil entity operating in the world today. Sure, Russia plays along, as two nuclear-powered nations like itself and China are seen to be in an alliance by the rest of the world really does pay off strategic dividends. Having said that, China is extracting its pound of flesh from Russia on a continuous basis, and patience is now beginning to run thin in the Kremlin.

China has now begun militarily antagonising Russia. Taking advantage of the Russia-Ukraine war, China has been conducting military drills in its far north-eastern border, raising expert concerns that Beijing could be considering a push into Russian territory. This might just prove to be the last straw for Russia in its dealings with China.

According to an investigative Australian newspaper The Klaxon, China’s air force and army have been conducting secretive military exercises in the Russian border areas along the Ussuri River, near Russia’s sparsely populated Khabarovsk and Ussuriysk regions. They involve Chinese Airforce fighter jets and bombers running drills, including live-fire exercises, out of its north-eastern Harbin Air Base, and China’s 78th Group Army running tank and armoured vehicle tactical drills.

Top international intelligence sources told The Klaxon that in the first week of February, Chinese Air Force fighter jets were observed operating out of Harbin conducting “low-altitude tactical navigation drills” and practicing “live-fire attacks on ground targets”. In the first week of March, also out of Harbin, a fleet of China’s Xian H-6 bombers was conducting “low-to-medium-altitude flight manoeuvre training” in the region.

According to one senior intelligence source, “China shares its entire north-eastern border with Russia, yet it still feels the need to conduct such drills, especially where its fighter jets and bombers practice taking out ground targets which can only be in Russian territory.”

A War in the Offing?

Why would China conduct highly-secretive military drills of its air force and army in a region where it shares a border with Russia alone? Had there been other ‘adversarial’ countries bordering China in this region, it would make complete sense for the country to undertake military exercises. However, the only country that borders China here is Russia.

The military exercises, which have not been publicly announced, are testament to the fact that China either anticipates a war with Russia in the near future or is preparing for one.

At a time when Russia is preoccupied in a big way with the war in Ukraine, the opportunity for China to launch an offensive against the Far East is now.

Read more: Russia is stepping up military presence in its Far East as China claims Vladivostok and rants about Indo-Russia friendship

The Potential of the Far East

Russia’s far east is the world’s most underdeveloped region. As a result of the extensive land coverage, the region offers enormous potential. Natural resources in the region include oil, natural gas, coal, lumber, shellfish, and a variety of precious minerals. Furthermore, Russia acknowledges the value of this region.

China has been eyeing Russia’s far east for quite some time now. In fact, in 2020, the CCP had even gone on to subtly stake claim on Vladivostok – a city in the Russian far east. Ever since Moscow has been wary of China and has been taking secretive steps to counter Beijing at a strategic level.

Now, with the war in Ukraine far from over, China seems to be opening a new front for Russia to fight in – this time, against the People’s Liberation Army.

Collection of Push Yourself Quotes and Captions for Instagram