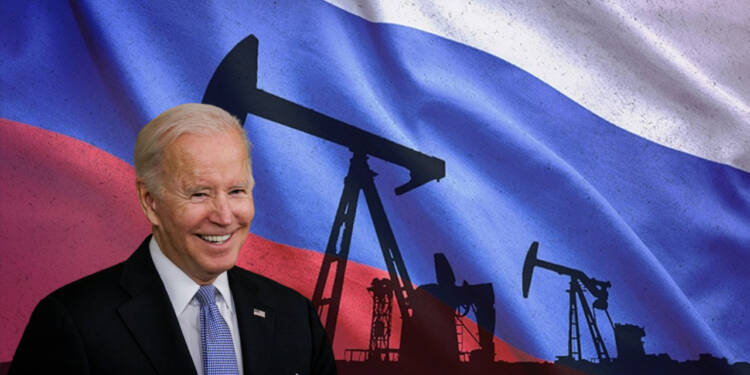 What the 79-year-old US president said Wednesday came as music to Vladimir Putin’s ears. While blaming Russia for skyrocketing inflation at home, Joe Biden appeared to suggest that the US could buy oil from Russia at limited prices. Biden said he’s working really hard to solve the inflation problem. So, what’s the plan? The plan is to buy Russian oil as soon as Europe imposes an oil embargo on Russia.

Referring to the sixth package of anti-Russian sanctions, Biden said, “The issue that is occurring now is you have Europe deciding that they’re going to further curtail the purchase of Russian oil.” Biden said that Europe’s actions to ban Russian oil would force Russia to lower its energy prices, and that could be a great opportunity for the United States.

Biden said, “There’s a whole lot of consideration going on about what can be done to maybe even purchase the oil but at a limited price so that it has to be sold,” He further told, “There’d be an overwhelming need for the Russians to sell it, and it would be sold at a significantly lower price than the market is generating now.”

US to act as a mediator

So, the plan is simple. US might end up buying Russian oil as soon as Europe phases it out by year-end. US could justify this decision by saying that Europe’s ban on Russian oil would throttle the world’s energy supply chains. So, US will purchase Russian oil, not for itself but for others.

Now, Biden didn’t specify which countries will the US be reselling Russian oil to, but it’s expected that a large chunk of supplies would go to Europe. You see, the irony is striking!  Europe isn’t allowed to buy Russian oil, right? But US will buy it, and then resell it to Europe! And that too, in the name of helping them!

So, who is stupid here? Biden? Of course not! Being a leader of the United States, he needs to find ways to mint money out of others’ miseries! But, it’s the stupid leaders of Europe who keep getting played into the USA’s hands!

Europe is finally realizing how fatal it can be to take Biden’s words at face value. After all, it was Biden who encouraged Europe to do away with Russian gas and oil, and who had put sanctions on the Nord Stream 2 gas pipeline. But now, when push has come to shove, Biden is simply chickening out!

Won’t that be helping Russia fund its war machinery in Europe? Yes, that will!

Won’t that render the European oil embargo on Russia totally ineffective and redundant? Yes, that will!

But Biden’s stupidity knows no bounds! He is hell-bent on making this world a lesser safe place; a place where there’s no place for sanity and logic, only for bigotry and hatred! That’s where Biden has led the world to!