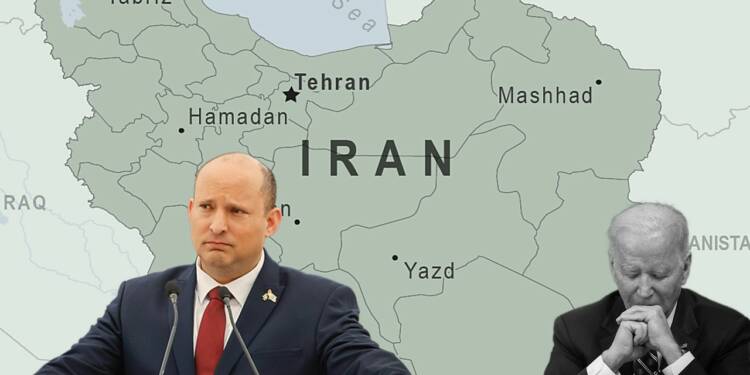 Israel has been prepping for years to carry out a lethal move across the borders of Tehran but to no avail. In the veneer of diplomacy, the US and other big powers in Europe vetoed every Israeli move that could have settled the dust with Iran way back in time.

At present times, with Iran playing mind games with the US to bring into fruition their latent desire for JCPOA and the delisting of IRGC from the terrorist list, the wave of concern has slithered through the bulwark of Israeli defence. Every single move that the US adopts is going further against Tel Aviv’s interest and as it seems Naftali Bennet has given a veiled threat to the US about launching an independent move regardless of the US position that will see the flames of war rising in Tehran.

The warning from the Israeli Prime Minister happened when he addressed the United Nations nuclear watchdog that Israel adheres to diplomatic resolution but if it is not bringing in the desired results, they will be forced to move with an independent move of sorts that may settle the scores.

The timing of the statement also holds weight since it was just two days back that Iran released images of a secret military base in the middle of Zagros mountains which is known as Strategic UAV Base 313. The secret base unveiled the array of lethal drones and other armaments that was wrapped up from the public glare by the authorities in Iran. The release of the images served a jolt to the neighbouring countries but most to Israel.

Bennet downplays the US

Moreover, the recent killing of the IRGC leader landed the Islamic regime fatigued and more of a stock reaction arrived when the US leaked information saying that it was Israel’s hit job that murdered the IRGC general. Iran taking up this issue called for vengeance against the Semitic forces. Israeli officials on the other side were infuriated by the US brinksmanship and also placed a measured warning on the US administration about the damage it could wreak on the Israeli-US alliance.

Now that time has arrived. Naftali Bennet looks changed. It was seen in abundance with the stance he made last day. “While it prefers diplomacy in order to deny Iran the possibility of developing nuclear weapons, Israel reserves the right to self-defence and action against Iran to stop its nuclear programme if the international community fails to do so within the relevant time-frame,” he added without elaborating.

Internal tussles have been running high within the chambers of the Israeli parliament. Bennet was on the edge over several issues that got the opposition go fury against him. But now with a clear-cut sign on how Israel could do the damage it intends to Tehran, Bennet has stiffened his position back as a leader who abides by his word.

Israel’s advanced military, widely assumed to have nuclear weapons, this week attempted to signal its strategic reach by going public with an air force strike exercise over the Mediterranean Sea and the rare deployment of a naval submarine to the Red Sea.

The US move of dancing to the tunes of Tehran has raised the alarm within the power circles in Tel Aviv. With the world looking toward the Ukrainian conflict, the middle east seems like a silent place. But it won’t be that long since that silent melancholy to metamorphize into a lethal war of mammoth proportion. Israel is ready to make the move.