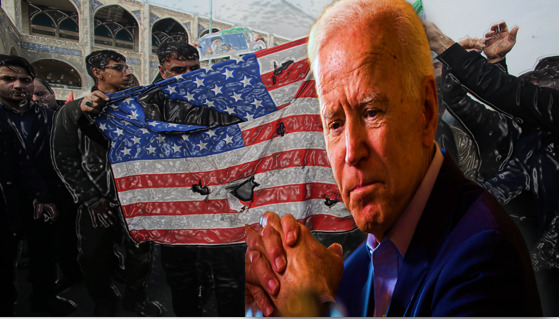 The Biden administration is about to open the floodgates for Iranian terrorists to enter U.S. soil and carry themselves around as they please.

The disastrous Iran Nuclear Deal is on the verge of being resuscitated.. Israel and at least four Islamic countries are against the deal being revitalized. Yet, the Biden administration could not care less.

The Biden administration is prostrating before Iran. It has fallen at the feet of the Ayatollah and the Iranian President. To please them, Joe Biden is all set to remove Iran’s Islamic Revolutionary Guards Corps (IRGC) from the U.S.-designated terrorist list. Yes, you heard it right.

According to a new assessment of policy implications authored by the Republican Study Committee, the removal of this designation will “open the gates for Iranian terrorists to enter the United States” and make it harder for law enforcement agencies to target IRGC affiliates operating in the United States.

Rep. Jim Banks (R., Ind.), a member of the House Armed Services Committee and the RSC chairman, told the Free Beacon, “IRGC terrorists would be able to cross our border, get billions of dollars, and [get] closer than ever to a nuclear capability.”

Opposition to the Deal Growing

Democrats are beginning to turn against the revival of the nuclear deal as well. According to the Free Beacon, Democrats on the House Foreign Affairs Committee last week emerged from a classified briefing on the new deal with mounting doubts about the accord’s effectiveness.

Their main points of contention were the Biden administration’s overtures to the IRGC, as well as its agreement to allow Russia to build up Iran’s nuclear infrastructure and use the country as a hub to evade U.S. sanctions.

With every passing day, it is becoming difficult for the Biden administration to get Congressional approval for the nuclear deal.

Joe Biden is playing with the security of the United States. He is compromising the safety of Americans. Iran’s IRGC controls several terror organizations across the Middle East and North Africa. Once the IRGC is delisted from the Foreign Terrorist Organisations list, its operatives and proxies will be able to seamlessly enter the United States.

Moreover, U.S. law enforcement now ensures that there is a blanket ban on the entry of all IRGC operatives and those pretending to be employed by it.

However, the Biden administration plans to make life tougher for American agencies, which will have no authority to block the entry of violent extremists from Iran into the United States.

It is common knowledge that Iran will pursue its military nuclear campaign even if the JCPOA is brought back to life. So, what we are essentially seeing is abject surrender by the Biden administration. Not only will Iran now make nuclear weapons, but the IRGC will also make its way onto American soil to terrorize ordinary citizens.

Americans, you need to be very scared. Your chief has gone crazy