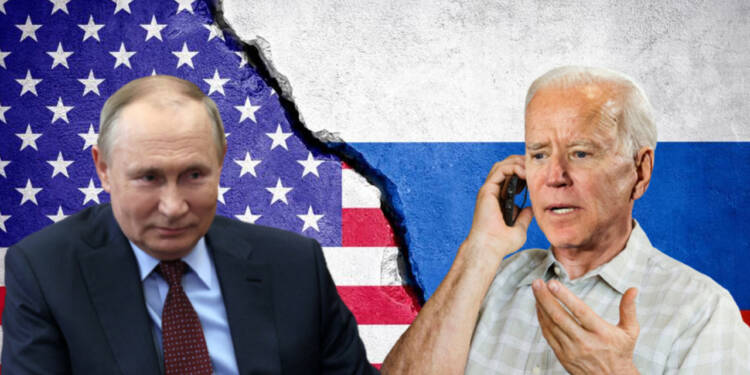 More than a hundred days have passed since the Russia-Ukraine conflict began, and there appears to be no conclusion in sight. The west, particularly the United States, has been generous in giving weaponry and ammunition to Ukraine. They were certain, and we emphasise “certain,” that Ukraine would win the war. However, as Russia launches a diplomatic offensive against the United States, the US is going haywire.

The US helped Ukraine recklessly since the onset of the conflict

Since the war started, the US has been pompously bolstering Ukraine’s win. The US has been providing every possible help it could to Ukraine. Be it financial or military aid, the US has left no stone unturned. For instance, C-4s, howitzers, Javelin anti-tank missiles, Mi-17 helicopters, armoured Humvees, M113 personnel carriers, Switchblade drones, M18A1 Claymore anti-personnel mines, Stinger missiles, and other weaponry have been supplied or are on their way to Ukraine. The Biden administration has been recklessly supplying these weapons.

For instance, the US has already supplied about 5,500 Javelin anti-tank missiles to Ukraine since the Russian invasion more than two months ago. Also, as per the analysts, the United States has sent about one-quarter of its stockpile of shoulder-fired Stinger missiles to Ukraine.

And because the US was confident that Ukraine would win this conflict, they used social media to spread pro-Ukraine propaganda. According to western propaganda on social media, Russia was humiliatingly losing the battle. We were told that the NATO-trained force in Ukraine was forcing the Russians to flee for their lives. We were informed that Russia was simply not progressing.

Nevertheless, for the US, Ukraine was a clear winner in the war.

“Ukraine clearly believes that it can win, and so does everyone here,” Austin said at the meeting of defence ministers, adding: “Ukraine needs our help to win today. And they will still need our help when the war is over.” US defence secretary Lloyd Austin said in one of his interviews.

Secretary of state Antony Blinken said that Russia is failing at the war and the western strategy [support for Ukraine] has started showing the results.

ALSO READ: Europe must not cross the Rubicon if it wishes to avert WW3

The US does not believe in ‘Peace-talks’ anyways

The only goal of the West, particularly the United States, has been to defeat Russia. It doesn’t give a damn about Ukraine’s integrity or sovereignty in any case. Furthermore, the US was so keen to defeat Russia that it stated that if necessary, it would remove its diplomats from Moscow.

Throughout it all, the word ‘peace-talk’ was clearly unknown to the United States. And now, as retaliation, Russia has made a fresh step. The United States is nervous as a result of this. It’s all messed up. It is now literally begging with Russia.

Russia is now planning to cut its diplomatic ties with the US. Russia is planning to shut down the US embassy in Moscow. And the US is shocked to a great extent. Nevertheless, the primary purpose of an embassy in any country is to keep the line of diplomatic connection open between the two respective countries. Embassies help to work with the country over the shared interests. And now as Russia decides to shut its last point of connection with the US, the US is all jittery.

“We must preserve the ability to speak to each other,” Sullivan told TASS in an interview.

This is in stark contrast to what US Secretary of State Antony Blinken remarked just a few weeks ago. He joked that he intended to dedicate “We Are Never Ever Getting Back Together” by Taylor Swift to Putin.

This provides for a really amusing situation for our readers. The US must first be certain of what it wants, whether it is merely to accept Russia’s participation in the peace talks or not. Second, the United States must now consider whether it is certain that Ukraine is still winning. Because if the US was confident that Ukraine would win the war, it would not have had to react to Russia’s plans to sever diplomatic ties with the country.