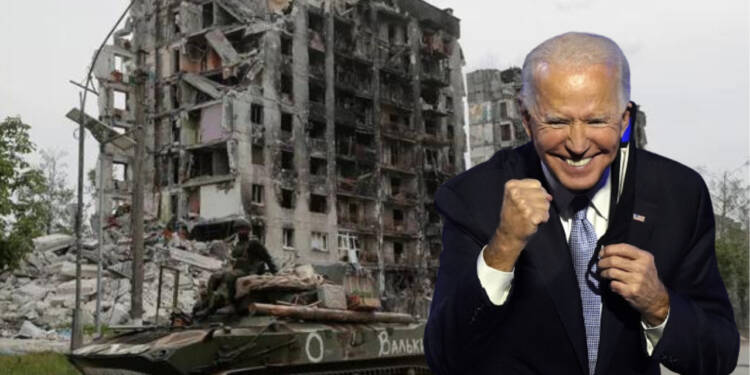 US President Joe Biden has a really bad habit of fueling the matter so much that it ends up being a catastrophe. Earlier, this was seen in the Afghanistan evacuation and now it is in front of everyone how the US pushed Ukraine into the war.

Although there are many theories as to how the war actually started, few blame Russia while others blame Ukraine. But, who exactly is responsible for the war?

A new revelation has come up that precisely clears the air that who actually caused the Russia-Ukraine War. It was none other than Joe Biden himself.

As per US media reports, before even the beginning of the war, US President Joe Biden ordered the public release of intelligence reports because US officials’ assertions about a probable attack were regarded with “scepticism” by American partners and allies, according to America’s spy chief.

Joe Biden had asserted the American spy chief to release the reports as soon as possible. Biden said, “you (American spy chief)  need to go out and share as much as you possibly can and ensure that folks see what it is that you’re seeing so that we can engage again and perhaps have more productive conversations about how to plan for essentially the potential of a Russian invasion.”

The US Director of National Intelligence Haines also stressed that the US indeed did a lot of sharing in this space with partners and allies, for ultimately developing “mechanisms for sharing” that can be used in the future. however, the strategy didn’t work out.

Not only that, but the United States also gave Ukraine 90 tonnes of military aid in January 2022, even before the start of the war. The aid was part of Biden’s late-December approval of an additional $200 million in “lethal aid,” which includes ammunition for Ukraine’s front-line defenders.

Had already locked horns with Russia

America under Joe Biden was already trying its best to take on Russia ever since the intelligence reports stated that Russia may be heading to Ukraine. Biden constantly warned Russia of the consequences and asked other nations to help Ukraine.

Not even once did Biden vow to send troops to fight against Russia. But, somehow he forced the whole world to take on Russia and defeat it at any cost.

Eventually, what has been the outcome of all his nuisance? Ukraine has simply lost all its leverage against Russia. Now, it survives at the mercy of Moscow and Vladimir Putin as many strategically important cities are now under Russian influence.

Read More: After pushing Ukraine towards the edge against Russia, Biden has left it hanging and Ukraine has crawled back to Putin

In short, it was the United States who was the first to push Ukraine into the war and advised Western allies to extend their support to Ukraine. Joe’s decision to share intelligence reports and execution of the anti-Russia movement made it quite certain that there will be a war between Russia and Ukraine in foreseen future, which eventually happened in late February 2022.