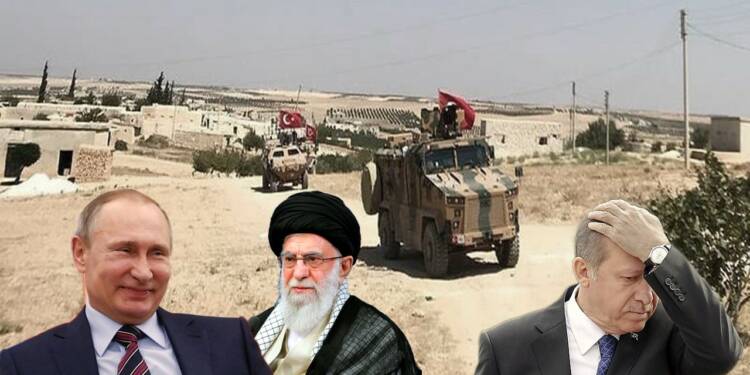 Not many days passed since Turkish President Recep Tayyip Erdogan tried a charm offensive with a phone call to Kremlin to win over the Russian president in Turkey’s ratcheted-up move for a military incursion in the northern Syrian region.

But the curry favouring attempt to lure Vladimir Putin to give a nod of assent to Turkish ruses in northern Syria didn’t take the path that Erdogan wished for. Putin raised suspicion about Erdogan’s stratagem in northern Syria and asked the Turkish leader to keep distance from his weaved-up plan of incursion. It stung Ankara’s power circles and turned out doubly disturbing for Erdogan.

But taxing his willpower, Recep Tayyip Erdogan reaffirmed his plans of setting the dust in the safe zone area of Tal Rifaat which Turkey considers its last bastion in Syria. Roughly at a time when Eastern Europe is enduring a crisis, Turkey is trying to picture its military plan in Syria as a move to counter the destabilizing attempts from the Kurdish forces, just to alleviate Putin.

But Putin has seen far bigger games and was reluctant to buy Turkey’s claims. Erdogan’s needle of threading himself servile to the Russian leader has broken. Russian with the latest move has decided to take back its troops in small amounts from the strategic regions of northern Syria. Never mistake this for Russia opening up space for Turkey to extend their claws into their prized Syrian hinterland, but it will be salt in injury for Erdogan.

America has recently lifted the Caesar sanctions from the northern Syria region and with Russia also doing an America with the withdrawal of forces, the Syrian land is on the verge of disruption. Seeing this, Turkey might have salivated over the chances. But the game in the bigger picture says that another contender will enter the fray. And now the talking point will be Iran.

Russia has solicited the move of withdrawal just to open up space for Iranians that could see a flooding of IRGC into the war grave of Syria. This has headlined a new rampage in cards for Ankara. Since 2014 Iran tried to figure a line to strengthen its position in Syria but never reached a conclusive solution owning to the disruption sponsored by their arch-rival USA.

But with Russia leaving more space can help Tehran wrap its influential blanket on the largely Sunni population of Syria. The sudden joy of getting into the Syrian stronghold doesn’t imply that Tehran is yet to needle out a plan. It has been years since Iran has been vying for its prized long corridor project that connects Tehran with the latakia port of Syria.

Iran’s construction of a land route to facilitate the movement of military forces and weapons through Iraq to Syria and Lebanon will, of course, be under Iranian control and influence via the Islamic Revolutionary Guard Corps and armed Shiite militias. This encapsulates in large, Tehran’s plans of extending its reach to areas that are currently under the power orbit of Ankara.

Beyond this, Russia leaving this space also has the potential for a three-way fold feud. Drug trafficking may ratchet up in Jordan in no time with the completion of the land corridor. Northern Iraq and Aqaba port fracas have been running laps in the already brewing trouble between both Iran and Jordan.

Read more: Aqaba Port is the new gamechanger that could make Iran suffer in silence

The blight of the highest degree is reserved for Turkey. Russia has diligently played its card and the stage is perfectly set for Hezbollah to lock horns with the Turkish rebels in northern Syria.