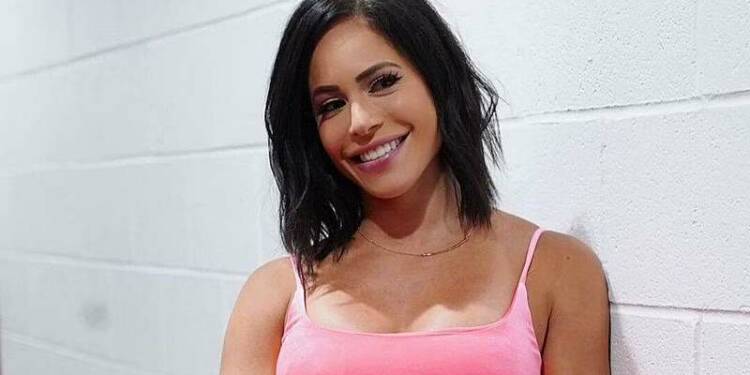 Charly Caruso, real name Charly Arnolt, is an ESPN sportscaster and TV personality in the United States. She is most recognized for her time as a sportscaster and ring commentator with WWE, where she worked under the ring name Charly Caruso from 2016 until 2021. On ESPN’s First Take with Stephen A. Smith and Molly Qerim, she is now a backup host and moderator. In this article we are going to talk about the biography, career, notable works, and family of Charly Caruso so read the article till the end.

In 2016, Charly was invited to a WWE SmackDown show in Indianapolis by Tony Khan, a friend, and future All Elite Wrestling co-owner. Charly met WWE Senior Director of Talent Relations Mark Carrano at that event, and he introduced her to WWE Monday Night Raw play-by-play commentator Michael Cole, who is key in the company’s hiring of TV broadcasters and ring commentators.

Cole was really intrigued, but no positions were available. When Brandi Rhodes, who is currently the Chief Brand Officer of All Elite Wrestling (AEW), decided to depart WWE in May 2016, it opened the door for Charly to join.

She debuted as a ring announcer for WWE NXT in 2016 under the name Charly Caruso, but it wasn’t long before she was promoted to the main roster, interviewing WWE superstars and hosting events, segments, and shows on USA Network, WWE YouTube, WWE social media, and WWE Network.

She hosted backstage interviews and pre-show panels on Monday Night RAW and WWE NXT until 2021 when she did not re-sign a new deal with WWE. Caruso got “backstage heat” for being difficult to deal with and appearing late to shows, according to Dave Meltzer. Caruso’s exit from WWE was influenced by this.

Caruso was born in the city of Indianapolis in the state of Indiana. As a child, she had a passion for sports and began participating in softball, volleyball, and gymnastics. She had hoped to compete in the Olympics as a gymnast, but owing to injuries, she had to resign from the sport. She also wanted to play volleyball at the university level, but her height prevented her from doing so.

Caruso earned a bachelor’s degree in broadcast journalism from American University in 2010. North Central High School was her previous school.

She began working as a reporter for WSAZ-TV in Huntington, West Virginia, in 2010. Charly then returned to Indianapolis to work for WXIN “Fox 59” as a freelance reporter.

She moved to WDAF-TV “Fox 4” in Kansas City, Missouri, in 2011 and worked there for two years. She returned to WXIN in 2014 to work as a sports reporter and anchor.

Is Charly Caruso and Charly Arnolt the same person?

Yes, Charly Caruso is the stage name of Charly Arnolt, so the both names belong to the same person.

Charly Caruso joined ESPN in 2018. She provides updates on SportsCenter and presents a Snapchat show called SportCenter. After someone in the talent department asked her what she wanted to do at the network if she had a choice, she hosted First Take for the first time a few months later.

She received more opportunities to First Take after making a positive impression in late December 2018, cementing her place as the principal fill-in host.

Charly also appears on ESPN’s First Take, Her Take program. The weekly show follows the same concept as the television show and features Kimberley Martin and Chiney Ogwumike. The podcast allows them to talk about other aspects of their lives and culture.

Charly also appears on SportsNation on ESPN+ as well as other shows on the streaming service on a regular basis, however, she admitted that it has been challenging to keep her WWE and ESPN schedules separate during the last 12 to 18 months. Since then, she has completed her transition from WWE to ESPN.

We hope this biography article of Charly Caruso will be helpful for you to understand her journey and works.

You get what you give quotes and captions for Instagram