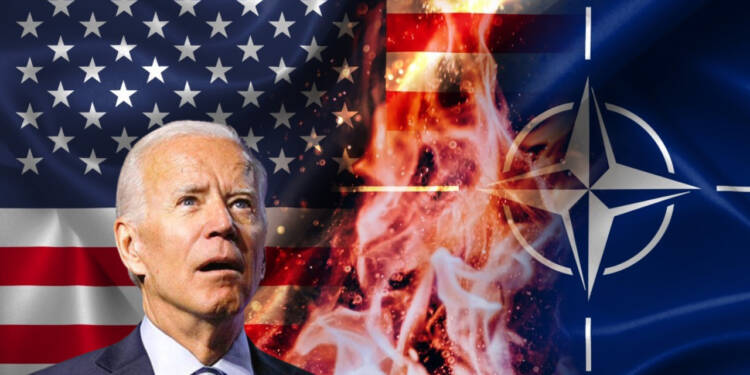 NATO was established with the goal of providing collective defence against the Soviet Union. It was the United States’ first peacetime military alliance outside of the Western Hemisphere. In 1991, the Soviet Union collapsed, but NATO remained.

Cut to 2022, the Soviet Union is gone, but now the alliance has found a new enemy, Russia. The Russia-Ukraine war made it quite obvious to the world that, NATO is actually a ‘clawless tiger’ as the US-led alliance failed miserably in defending Ukrainian territory.

Most of the NATO allies perform operations on the basis of ‘Article 5’ which specifies that if any NATO Ally is the victim of an armed attack, every other member of the Alliance will treat the act of violence as an armed attack on all members and will take whatever actions are necessary to support the attacked Ally.

Now, after presenting a blunderous Ukrainian act internationally, Joe Biden is heading to destroy NATO forever. No, the alliance is not getting dismantled, but its purpose will be changed forever.

The former NATO chief Anders Fogh Rasmussen in a memo suggested changing provisions inside ‘Article 5’. Rasmussen has stated that the world’s “democracies” need to create an economic version of NATO’s Article 5. The nations must pledge mutual defence in order to defend themselves from aggression by economic “bullies” like Russia and China.

The memo was co-written by former US Ambassador to NATO Ivo Daalder, president of the Chicago Council. He also suggested that an economic mechanism should operate in the form of an “alliance of democracies” that comes together and agrees, possibly through Washington’s “Summit for Democracy” format, to “secure unified support from fellow democracies” in the event of “economic coercion by an autocracy”.

The former chief and US Ambassador stress that economic action is necessary given the fact only a few nations have imposed sanctions on Russia. The authors also recommended the creation of alternative “democratic” lines of credit and supply lines to help businesses adapt to soften the blow of pulling out of major “autocratic” markets.

This call for economic action is indicating that NATO’s initiative against Russia to destroy its economy has somehow backfired. Hence, the former NATO elites are calling for mandatory collective action.

The failure of sanctions

Daalder has acknowledged that as recently as last year such an idea would not have been entertained, but ever since the Russian invasion of Ukraine happened, the world leader has started to understand that the ‘world is changing’.

Following China’s commercial clashes with Australia and Lithuania, as well as Russia’s weaponization of its natural resources in the standoff with the West over Ukraine, the US’s push for combating authoritarian economic aggression has increased.

The plan has been shared with Joe Biden’s administration, including at the White House, Treasury, and State departments, along with EU officials, and all of them are in consensus over the matter.

The West believes that through this, autocracies would face the unified economic strength of the democratic world, a grouping of economies representing well over 60 per cent of the world’s economic power.

Read More: Biden’s sanctions on Russia are so powerful that Russia will grow richer twice as fast

These words reveal that NATO feels a pinch of guilt for failing to address the economic crisis due to a lack of coordinated action. As a result, this action has been taken. However, this will obliterate NATO’s actual motive, which was to defend militarily. NATO must first fully exercise its existing responsibilities, after which it must decide on additional actions.