NATO is dead, and no one knows it better than its founding member 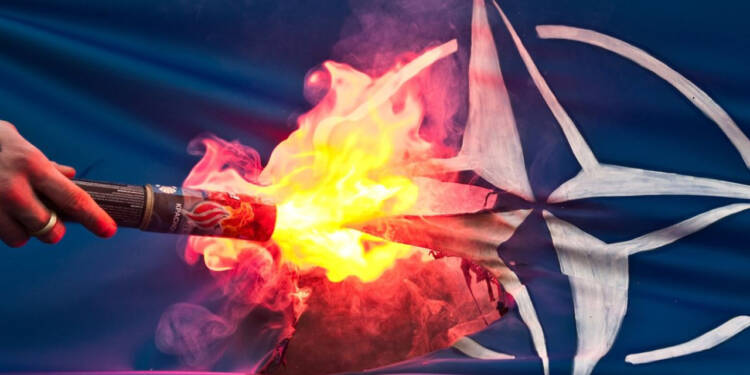 Russian-Ukraine war has proven the inefficiency of NATO. NATO, which is considered as the world’s largest military alliance has repeatedly failed to perform its duty. First, it provoked Russia when it assured Ukraine of including Kiev in NATO Membership Action Plan in 2021.

NATO kept on promising Ukraine of membership and the benefits of its inclusion, but when the time arrived for them to actually help the Eastern European country and get boots on the ground, it stepped back. The question now arises, does NATO really want Ukraine to be its part, or was it just a move to trigger Russia?

NATO was formed in 1949 aftermath of the Second World War. It had one major motive – to encourage the European political integration. Needless to say, it failed miserably.

Its founding members included the United States, Canada, Belgium, Denmark, France, Iceland, Italy, Luxemburg, the Netherlands, Norway, Portugal, and the United Kingdom. The countries agreed to consider attack against one an attack against all.

Instead, NATO was reduced to a ‘puppet’ of US. It went on war in places like Afghanistan, Iraq and Libya where it had no concern at all. It failed to stop Turkey when Ankara went on offensive in Cyprus. The fight between Britain and Iceland in the ‘Cod War’ exposed its internal differences. Rather than bringing peace in Europe, it caused hostilities among several nations.

Countries like Canada, Iceland, Denmark, Norway, Ireland, and Portugal were included in NATO as they held territory that formed a bridge between the opposite shores of the Atlantic Ocean, which would allow military operations more quickly if it became necessary.

Denmark has a history of being hostile to European Union and its policies. It still uses Krone as currency and not Euro as one of the  opt-out from Maastricht Treaty in the Edinburgh Agreement.

In the same Edinburgh Agreement, Copenhagen opted out of European Union’s Common Security and Defence Policy (CSDP), which is EU’s primary mechanism for dealing with conventional and unconventional security threats, as well as for planning a EU-wide defence.

Denmark remains the only nation in EU that is not included in the bloc’s defence and security policy.

Denmark which had always trusted NATO for its prospects rather than EU has however taken a U-turn on its current policy. The U-turn was a result of the NATO’s failure in Russia-Ukraine conflict.

First, NATO provoked Russia; NATO Secretary General Jens Stoltenberg in June 2021 said that Russia will not decide whether or not Ukraine will be allowed into NATO.

Putin before deploying his forces on Ukraine soldiers asked NATO to stop Ukraine from joining the alliance. The reports of NATO supplying weapons to Donbas and Crimea region infuriated Putin even more, he said, “Do they think we’ll just sit idly by?”

NATO had enough time to prevent the war but the dominance of US loomed large on the organization. Now even when the war took place, NATO could have fulfilled its promises of helping Ukraine but it didn’t. Its now been 100 days of war but there has been no fast pacing of Ukraine’s application. Ukraine Foreign Minister Dmytro Kuleba criticizing the slow pace of the application said, “has been dragging on for an indecently long time.”

The excessive bureaucracy in NATO cautioned Denmark to take such a decision. Denmark, that has always been hostile of the EU has now decided to join bloc’s common defence policy. In a referendum in Denmark 67% of the respondents voted for Copenhagen’s inclusion to the EU’s Common Security and Defence Policy.

Country’s Prime Minister Mette Frederiksen rejoiced, “We’re showing that when Putin invades a free country and threatens stability in Europe, we others pull together. Denmark now can partake in the European cooperation on defence and security. And for that I’m very, very happy.”

Denmark change in its course, who is also the founding member of NATO towards EU bloc defence partnership, is a watershed moment. It highlights the failure of NATO in fulfilling its objectives and promises. It also underscores how Europe which has been under the shadow of US, is finally looking for its own identity.