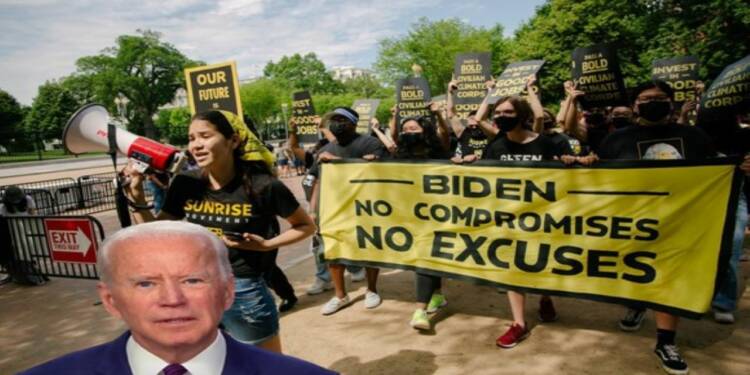 Since taking office in January 2021, Biden’s environmental policy has included a number of laws, regulations, and projects. He indicated that the US would shift its focus to renewable energy. The Biden administration has also provided Congress with a tax package that promises to phase out fossil fuel subsidies over time and replace them with incentives to begin producing green energy.

In his proposed budget, he recommended a 30% increase in clean energy research and development, a $2 billion investment in green energy projects, and a $6.5 billion loan to rural towns to assist more green energy, power storage, and transmission projects.

He started revising and strengthening the National Environmental Policy Act (NEPA) and issued a series of executive orders aimed at reviewing or undoing the previous administration’s environmental policies, such as wildlife protection, the construction of the Keystone XL pipeline, and oil and gas drilling on federal lands. By 2030, he vowed to put a stop to and reverse deforestation and land degradation. He essentially wants to declare the United States a drilling-free country.

However, he has recently been observed making a U-turn on his green energy plan. President Joe Biden has urged oil refineries in the United States to generate more gasoline and diesel. Not only that, but he has been reversing nearly all of his green energy policies. On federal territory, for example, Joe Biden approved onshore oil and gas leases. This means that drilling on about 144,000 acres of federal land might start soon. This was a significant shift from Biden’s ambition of making the United States a drilling-free nation.

Why is he changing his mind about green energy when he was formerly a strong supporter? The reason for this, of course, is America’s ever-increasing inflation as a result of Biden’s misguided policies. From food to gas, almost every commodity’s price has increased under Biden’s watch.

Gas costs in the United States are currently running around $5 per gallon, putting a financial strain on many Americans, so much so that Americans have started migrating to Mexico en masse.

Nevertheless, not only the domestic economic policies of the Biden Administration are hurting the economy, but his foreign policies are also failing to hit the right note. His obsession to subdue Russia amid the Russian-Ukraine conflict is making Americans pay at home. He is going haywire in accomplishing his motives against Russia. Severe sanctions on Russia (a major fuel supplier) have hit America’s economy hard. But Biden seems to be unsighted over the issue.

Americans have definitely paid the price for his rash decisions at home. He’s now at the point where he’s dismantling practically all of his green agenda initiatives. He’s even pleading with Iran and Venezuela for oil.

But Biden must realise that if he had not made the hurried choice not to impose an embargo on Russian oil and gas, he would not have been forced to take these anti-climate change measures. He would have followed his green energy plan without a hitch. For Americans, it could be interpreted as Biden’s attempt to lower inflation. But this is unmistakably a political move on Biden’s part. In any case, rising inflation poses a political threat to Biden as the mid-term elections approach at the end of the year.