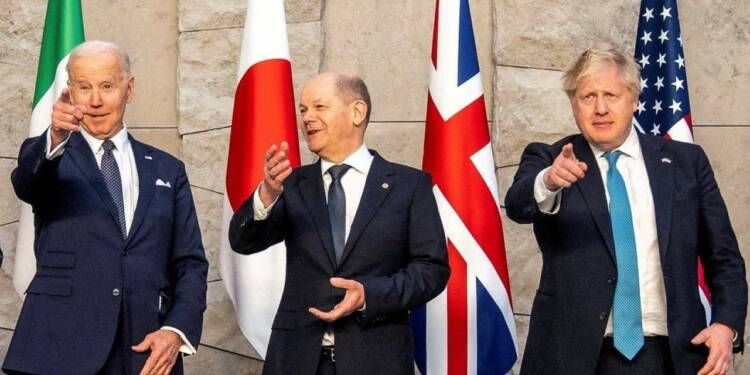 NATO is too feeble to put up a decent fight, let alone lead a war. During the start of the Ukraine war, many geopolitical enthusiasts shared this same opinion but the world moved away from such pessimism and held the belief that NATO could do wonders in Kyiv. But currently seeing the fate of Ukraine, it reverberates throughout the globe that NATO did nothing in Ukraine. More than anyone, the US has finally accepted this fall.

The US has tacitly admitted that the elevated talks of NATO did nothing to deter the Russian offensive. But Joe Biden is not stopping in his move. Washington has levelled a new plot that could see a possible security alliance between the UK, Ukraine, Poland, and the Baltic States with the United States.

The US Permanent Representative to NATO, Julianne Smith, said on Tuesday that Washington would “want to support” the idea of a new security alliance, which could reportedly include Ukraine, the UK, Poland, and the Baltic States.

The story is just not about the new military bloc in Europe but the focus should be pointed to the timing decided by Washington to launch this move.

Behind the façade of the new military cooperation, there is a motive that has been running through Biden’s mind for long. Ever since France succeeded Slovenia as the head of the European Union, the US autonomy over Europe has been seen fading away owning to the shrewd politics employed by the former banker turned France President Emmanuel macron. EU started taking decisions at will without consulting their former demigod in the United States. Even Macron’s call for a new military bloc for the EU incensed the power circles in Washington.

So, the current act from Washington is not anything favouring Ukraine but the real meat of the issue is to just annihilate the whole of Europe and especially France. The US diligently pointed out countries that are already at odds with the EU and Washington got very successful in this mission.

Macron has recently shown a tilt towards Russia with statements like “don’t humiliate Moscow”. He also stressed on the fact that “Ukraine might not easily get into the EU”. These statements further solidified the United States’ devious plan to get hold of the rebel European countries.

The United Kingdom is already a lackey of the United States and the bitter tussle they hold with the EU is a story that needs no introduction. Poland on its side has been embroiled in harsh words with the EU over the COVID relaxation funds that still run in a stagnant mode as Warsaw is fighting an economic downfall. But the interesting entrant into this new military bloc is the Baltic nations.

Compared with other countries, the Baltics are highly prone to Russian attacks since they share a close border. Also, there has been an ensuing faith crisis between the Baltic nations and the EU over the former’s stand in the Ukraine war.

Recently the Baltics headlined the news after NATO conducted one of its largest military exercises named “Hedgehog” in the Baltic Sea with 15,000 troops involved in the exercise in Estonia, making it one of the largest military drills held in the country since 1991.

Russia was observing this move and within a matter of time Kremlin retorted with naval exercises involving about 60 warships in the Baltic Sea amid heightened tensions with Ukraine. The Baltic countries are currently a vulnerable lot and the newly weaved plan of the US is a suicidal move for the Baltics considering the borders it shares with its cantankerous neighbour.

British prime minister Boris Johnson views this move as an alternative to the European Union while Ukraine president Volodymyr Zelensky is yet to make a response regarding the new bloc. Whatever be the outcome, Washington is laying seeds of dispute in Europe and it is up to the countries involved in this plan to decide their fate.