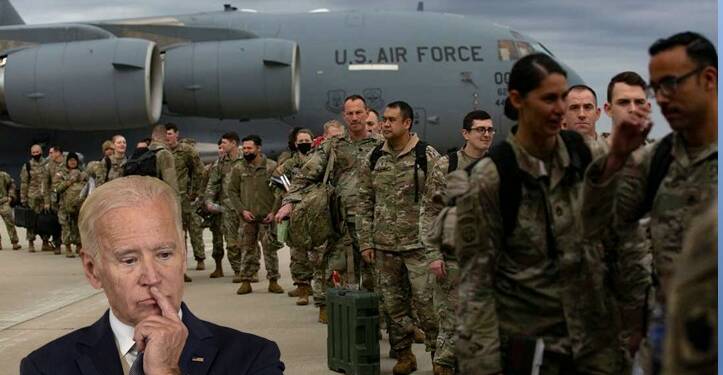 When the Russian-Ukraine war broke out, US President Joe Biden rallied American troops to fight for Ukraine. But in just four months, Joe Biden has implicitly conceded defeat. There aren’t many references today of Ukraine winning the war.

Furthermore, the lives of American soldiers who fought for Ukraine are now in jeopardy because Volodymyr Zelensky has unequivocally refused to provide them with a safe route to the United States. Russia, on the other hand, is still looking for retaliation against these forces.

Well, if someone is in danger, the United States rushes in to save the day. But, guess what? America under Biden isn’t even concerned about evacuating its own military personnel.

Since the outset, the US has stated categorically that it will not provide any military support. As a result, the majority of the soldiers who arrived in Ukraine were volunteers. The Biden administration supported the move and encouraged more volunteers to come forward.

However, things have begun to alter since Russia occupied Eastern Ukraine. The Russian military often kidnaps these volunteers and makes them untraceable.

Reportedly, two Americans, Alexander Drueke and Andy Huynh, both US military veterans who had been living in Alabama and volunteered to support Ukraine have all of a sudden gone missing and are feared to have been taken hostage by Russia.

What makes it worse is that the White House has no information about the volunteers. Upon being questioned over the issue, White House spokesman John Kirby said he could not confirm the disappearance of the two Americans but added,“If it’s true, we’ll do everything we can to get them safely back home.”

A third American who had travelled to Ukraine during Russia’s military invasion went missing a few days later. As expected, the White House had no information regarding the third missing soldier.

Rather than seeking diplomatic solutions to bring its soldiers home, they have started preaching to Americans not to enter Ukraine. “This is a battleground. It’s a fight. And if you’re serious about helping Ukraine, there are a slew of better, safer, and equally effective methods to do so,” said one White House official in a recent interview.

If one recalls correctly, this is the same Biden administration that advised US military veterans to fight for Ukraine.  Biden’s message of volunteerism was even broadcast throughout the world by the liberal media.

But when Russia started chasing these volunteers, the 79-year-old President remained completely silent. You see, the United States never stopped American civilians to fight for Ukraine against Russia. It was a bad idea to send civilians to battle the military. But failing to evacuate them and putting them at risk is far worse.

Read More:Department of Defense suggests that Biden has turned US forces into sitting ducks

It was obvious as day that Ukraine will lose this war. Three volunteers have died as a result of Biden’s inactivity. It’s important to note that the number of people kidnapped by Russia could be even in the hundreds.

Disowning your own population and leaving them to fend for themselves in a war zone is cruel. Three families have had their happiness torn away from them, and Biden is completely to blame.