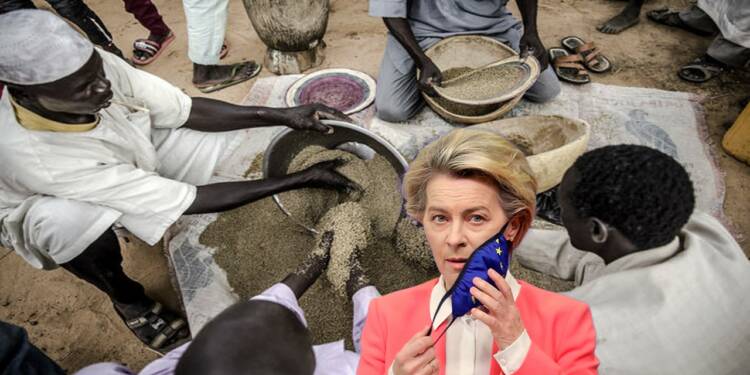 One thing we need to praise the West, especially the Biden administration for, is its superior propaganda spreading prowess. The Russians are being accused of having orchestrated a “deadlock” that could lead to a global food crisis.

The African continent, even after possessing 60% of the world’s farmable land, is one of the largest importers of food grains. The war in Ukraine has threatened the food supplies of more than 14 African nations and has pushed the food inflation to problematic levels.

But, is it really Russia who is blocking off the supplies to strangle the African content? Or is the west that has time and again tried to defame Russia and has provided financial and weaponry assistance to Ukraine in an attempt to prolong the war to further their own interests.

However, statements made by the Ukrainian Ambassador to Turkey- Vasily Bodnar have shed light on who is really controlling the supply of grain. He stated that:

“Effective security guarantees are required for maritime shipments to resume. These guarantees must be provided through the supply of appropriate weapons to Ukraine to protect its coasts from maritime threats and the involvement of the navies of third countries in protecting the relevant part of the Black Sea.”

This statement that came from a leading Ukrainian Authority has quashed the misconceptions that Russia was the one blocking the essential supplies and was putting the developing countries in danger.

Real reasons behind the crisis.

The suffering of Africa was explained by Russian Ambassador to the UN Vasily Nebenzya. The context of his statements indicate the mishandling of the COVID situation by the west, Anti-Russia sanctions and Ukraine’s decisions to mine its own ports.

The West and Europe have a history of employing soft power to create a power play that has the potential to alter the order in their favor irrespective of the repercussions of their actions on weaker nations. Similar events are now unfolding in the wake of the Ukraine war.

The origin of the situation is more of something that is artificially created rather than formed through naturally occurring events. All these fabricated events unfolding on the global stage make the spectators question the authority and factuality of the delivery channels.

Nebenzya has previously suggested that Kiev could possibly ship off its wheat supplies to European countries in exchange for securing military equipment. Russia has suggested routes to Kiev so that the dependent countries could experience relief, these routes include the Azov Sea; the Black Sea; overland through Belarus en route to Baltic ports; and across Western Europe.

Some reports even mention a plan where Turkey would help Ukraine by removing the mines in the waters near Odessa and escorting its vessels which would then benefit from the safe passage provided by Russian warships through the strait of Bosporus.

However, Zelensky is not sure of Russian intent of attack if he agrees to demine its waters even after Putin has promised not to initiate maritime aggression from the concerned waters. Russian Foreign Minister Lavrov’s visit to Turkey earlier could be an indicator of this plan being set into motion.

The Ukrainian attempt guided by the west to paralyze the food supply chain of Africa is a major tragedy in the making. Kyiv’s motive to supply the already efficient European countries with grains is basically to acquire anti-ship missiles for its defense.

On the other hand, the European countries are looking towards the creation of a scenario where African countries would have to incur dependency on them for food security in exchange for access to the vast energy resources to substitute the dependency on Russia.

African countries such as Ethiopia, Nigeria, and South Africa are inculcating policies and price controls to tackle the situation. However, many African countries would not have the financial capability to tackle this and could end up being exposed to acute poverty and malnutrition.

A scenario like that of the Syrian migration crisis could be a very big possibility. More than 78,000 Syrians have applied for asylum in the European Union so far this year, a 70 percent increase from last year, according to EU records. African citizens could soon incur the same fate as those of the Syrians if Kiev insists on keeping the Global South hostage.