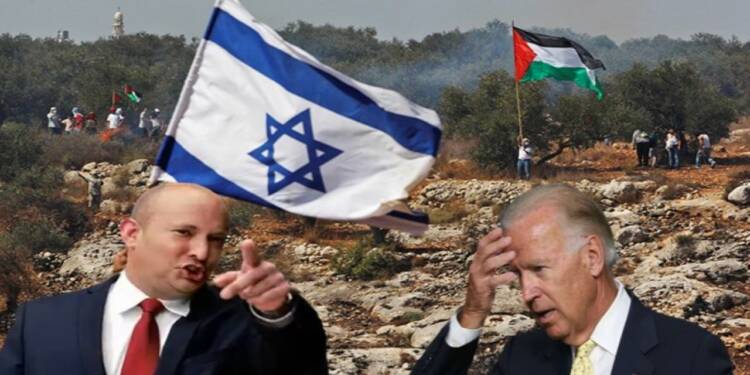 Multiple US administrations in the past tried every tactic in their books of diplomacy to render an amicable relationship between Israel and Palestine. The touted two-state policy proposed by the West never saw light after vociferous opposition from Tel Aviv. The long-held tipster mentality of the West to incorporate the two raging countries together has always faced roadblocks and now when the storm is kind of settled, the United States under the helm of Joe Biden is back again trying a mediator role to end the dispute in the Middle East.

The world knows how meticulous is the US way of getting into a conflict and exacerbating it to unprecedented levels. But more than the world this time the concerned ones in Palestine and Israel had discerned this particular trait that the United States embodies. The Palestinian Authority (PA) and Israel have rejected the US proposal to meet ahead of US President Joe Biden’s visit to Israel and the West Bank, news agencies reported on Wednesday.

Palestinian officials are blasé over any kind of US involvement with the current political scenario in eastern Europe acting as a case study of how the West mediation has gone awry leading to mayhem in Kyiv. Moreover, Palestine still vows a two-state policy and any kind of backtracking from that won’t bode well with the Mahmoud Abbas-led Palestinian government.

On the other hand, Israel also stands indifferent to the sudden initiative put by Washington to alleviate the tensions between the two countries. “A bad idea because it would be like a beginning of a political process without any guarantee for its success.” Quoted Tel Aviv.

The Democrats in particular carry a soft spot for the demands put on the table by militant outfit Hamas. The influential group of young liberal congresswomen, known informally as “The Squad”, that includes Palestinian-American Rashida Tlaib of Michigan and Somalian refugee Ilhan Omar of Minnesota have even gone public with their espousal of Hamas.

Any kind of détente that the US seeks with Hamas in the conflict won’t sit well even with the President of PA. Mahmoud Abbas seeks to end the conflict at the negotiation table with Israel rather than through armed violence. But the broader picture here is how the US is trying to persuade Israel after TEL Aviv recently got into the ire of Russia following the bombing that happened in Damascus airport.

The spate of events that transpired in Eastern Europe and the former US involvement to end the territorial dispute on the West Bank is enough for the authorities in Israel and Palestine to snub the West at face value. The US desire to chase one country after another to get into a mediation role is getting snubbed everywhere.