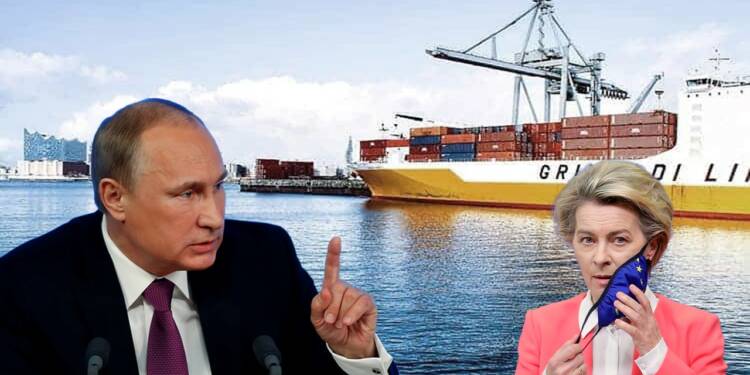 The EU was pretty sure that it is severely punishing Russia for its military operation in Ukraine after it imposed an embargo on 90% of the oil imports from Russia. But to EU’s disappointment, countries like India and China didn’t come under the Euro-American pressure of sanctioning the imports from Russia and kept the imports of the Russian Oil unhampered and unhindered. In fact, Russia is now India’s second largest crude oil supplier

Insurance as a weapon

This obviously took the frustration of the EU to unimaginable levels. The EU couldn’t digest the fact, that Russia, a country they’ve imposed such heavy sanctions on, for allegedly committing human rights abuses, is doing well economically. An EU smoldering in frustration then declared a ban on its companies from insuring ships carrying Russian oil, in an attempt to make it harder for Moscow to divert hundreds of thousands of barrels a day to other buyers in India and China.

Read More: European Union comes up with a clever plan (to bypass its own sanctions on Russia)

“Targeting the insurance side of things is the best shot at halting Russian crude flows instead of just redirecting them,” said Matt Smith, lead oil analyst at Kpler, a market intelligence firm.

The EU announced that it will block all its companies from insuring the transport of Russian oil to third-party countries after a transitional period of six months.

A dilutional EU was confident that this would certainly affect the Russian economy. The Western powers blinded by their hate for Russia even failed to notice the fact that the European countries and the United States will suffer from a substantial increase in world oil prices as a result of sanctions which they call punishments.

“This will make it particularly difficult for Russia to continue exporting its crude oil and petroleum products to the rest of the world since EU operators are important providers of such services,” the Commission, the EU’s executive arm, said in a statement.

Little did the EU know, that Vladimir Putin already has a Plan B to tackle these restrictions and sanctions inflicted by the EU and the West.

Russia has promised to get around the new laws by relying on governmental guarantees, which could theoretically replace standard insurance coverage. According to Reuters, the Russian National Reinsurance Company, which is controlled by the Russian government, is now the principal reinsurer of all the Russian ships trading in crude oil.

“This problem is solvable,” Dmitry Medvedev, deputy chair of Russia’s Security Council, said on his official Telegram channel. “The question of insurance of deliveries can be closed through state guarantees in the framework of international agreements with third countries. Russia has always been a responsible and reliable partner, and will stay that way going forward.”

Russian ships henceforth won’t have to be dependent on the insurance companies from Europe for smooth and disruption-free oil trade.

There’s another reason why this plan of the EU to block the companies from insuring the Russian ships is bound to fail terribly. European companies dominate the ship-insurance sector. European companies earn millions every year by providing insurance to trading ships. Russia is one of its biggest clients. This move of the EU will certainly anger those involved in this business.

EU has basically invited a series of disastrous problems for itself with its moves and decisions. EU needs to wake up from its deep slumber if at all it wants to evade the tough times waiting for it.