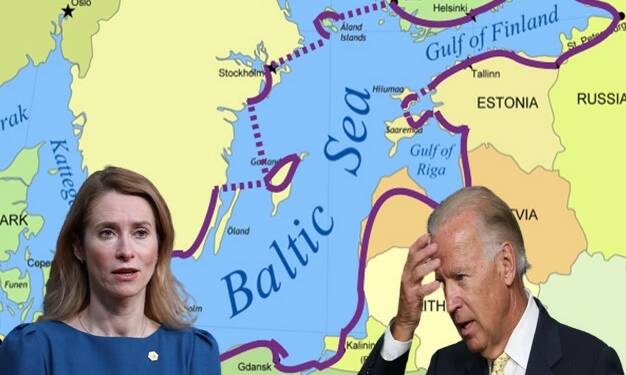 The Baltic Sea region has undoubtedly been very significant to Russia for strategic reasons. And Biden has been gleefully exploiting Latvia, Lithuania, and Estonia against Putin in order to antagonise him. Recently, Biden revealed a proposal in which the United Kingdom, Ukraine, Poland, and the Baltic States could form a security alliance with the US.

Julianne Smith, the US Permanent Representative to NATO, stated that the US would “want to support” the proposal of a new security alliance, which could include Ukraine, the United Kingdom, Poland, and the Baltic States.

Another Ukraine in making

The story is just not about the new military bloc in Europe but the focus should be pointed to the timing decided by Washington to launch this move. Behind the façade of the new military cooperation, there is a motive that has been running through Biden’s mind for long. It’s all part of Biden’s plan to turn these Baltic countries become the next Ukraine. Biden is aiming to construct a base in the region so that the newly established facility can be used if the need to strike Russia arises in the future.

Putin, on the other hand, has made it clear that he would not allow this to happen under his watch. In its most recent action, Russia has begun a military exercise in the Baltic Sea, with 60 warships from Moscow taking part. The film of the “scheduled operational exercise with groups of the Baltic Fleet” was made public by the Russian Ministry of Defense (MoD).

You see,  the Baltic nations allowed themselves to be exploited as a pawn in the region by the US against Russia. Estonia, in particular, has been a trailblazer in opposing Putin on the Ukraine conflict, urging no compromise with the Kremlin leader. As a result, Kaja Kallas, now Estonia’s Prime Minister, has become one of Europe’s most outspoken critics of Russia’s conflict in Ukraine.

However, Estonia appears to have made a U-turn lately. Estonia’s recent actions suggest that it is attempting to assist Russia through the back door. Estonia is aiding Russia in smuggling its oil, effectively by exporting it to Saudi Arabia. Are you perplexed as to how that is even possible? Let us assist you in resolving this conundrum.

Presently, Estonia is a country without a single oil refinery to its name. However, it has recently chosen to increase its fuel oil shipments to Saudi Arabia. In June, the Baltic nation will provide more power generation and transportation fuel to the world’s greatest petroleum exporter i.e. Saudi Arabia.

However, it is important to highlight that the oil cargoes that will be exported to Saudi Arabia are most likely from Russia. According to Iman Nasseri, the managing director for the Middle East at consulting firm FGE, Estonia has received fuel oil by rail from Russia.

Estonia imported 8 million barrels of fuel oil in the first five months of 2022, of which most came from Russia and got reexported again, according to Nasseri.

This is a knife in Biden’s back. The 79-year-old President is counting on these nations to continue their anti-Russia crusade. However, the same countries have begun to support Putin, albeit covertly. This clearly shows that these countries want to maintain their economic connections with Russia. They may give in to Biden’s pressure and join an anti-Russia alliance, but they are well aware that Russia is their neighbour, and maintaining enmity with Russia, in the long run, would be tough.