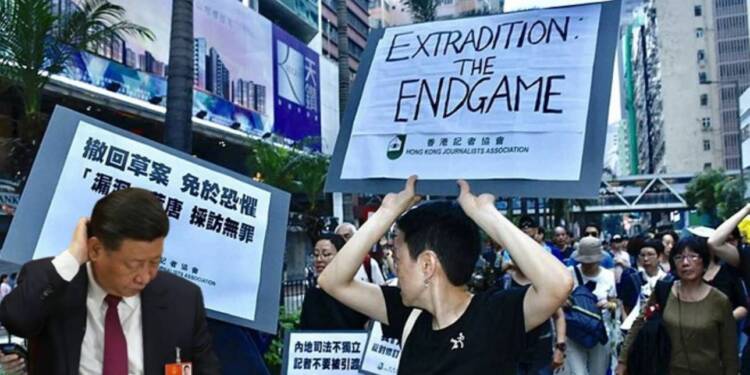 The 2019 protests against the “National Security Law” imposed by Beijing was one of the biggest in Hong Kong’s history witnessing the involvement of several thousand citizens. Reports mention thousands of arrests during the demonstration. Recently, Anti-CCP activists marked the third anniversary of rallies against the persecution of the Chinese communist party. As you can see, the seeds of a new uprising have begun to germinate once more.

Hong Kong was formerly a part of the Chinese Qing Dynasty. The region was ceded to the British in the aftermath of the First Opium War. The city was transferred to the Chinese in 1997. After the Chinese took control, Beijing allowed Hong Kong to manage its own affairs except for defence and some sensitive ministries under the “one country, two systems” policy.

The CCP also started to paint an alternate picture and imply that Hong Kong was never actually a colony. They are proposing a new syllabus in Hong Kong schools that attempts to inculcate the understanding of the distinction between a colony and colonial rule. The books have been drawn up for a specific course to be taught in Hong Kong schools focusing on citizenship ideals, lawfulness and patriotism, BBC reported.

This unethical attempt by the Chinese to alter history to instil a sense of Chinese identity in the students is outright unlawful and oppressive. You see, Hong Kong has hardly been a peaceful place ever since. The dragon’s attempt to influence the city has resulted in protests and violence for many years.

Beijing’s most aggressive action till date to curtail the rights of the special administrative region was the imposition of the National Security Law on the city. But what is this law really about? Let’s find out.

The legislation effectively criminalizes any dissent and adopts extremely broad definitions for crimes such as terrorism, subversion, secession, and collusion with foreign powers. It also allows Beijing to establish a security force in Hong Kong and influence the selection of judges who hear national security cases.

Many prominent figures including lawmakers and journalists have been detained under this law. Beijing describes the law to be necessary to maintain order but this is all a disguise to consolidate CCP’s control over Hong Kong. Dragon has always been known to be the brand ambassador of violating human rights and limiting the democratic process.

The month of June in 2019 was historic for Hong Kongers when the international community took notice of the intensity of protests that were happening against the  “National Security Law”. However, the protests were contained by the CCP in lieu of the growing threat of COVID-19.

Recently, on June 12, protests emerged in Tokyo, Singapore, London and several other places including some parts of Hong Kong. Activists representing the Tibetan, Uyghur, Mongolian, Hong Kong, and Taiwan populations spoke out against China’s atrocities, emphasising their pain. People at the Vancouver Art Gallery, Canada re-enacted scenes from a June 12 confrontation between police and protesters, Canadian Broadcasting Corporation (CBC) reported

The resistance to the communist regime is surely an exemplary example of the rise of “ Truth Against Tyranny”. These demonstrations do not bode well for the totalitarian CCP. It’s proof that the Chinese government’s efforts to quell the protesters have failed miserably.

However, the Chinese regime is leaving no stone unturned in its attempt to transform the city into an un-democratic establishment. As we all know, the very existence of the Chinese Communist Party owes to its draconian, oppressive policies

The magnificent metropolis of Hong Kong has been ravaged by Beijing’s policies. It used to be a global economic powerhouse, contributing about $370 billion to global GDP and housing a slew of multinational corporations. But now, Hong Kong is on its way to becoming a global pariah as a result of the Chinese regime’s repressive policies, with several corporations exploring alternate places such as Tokyo and Singapore.

For over a decade, China was the big brother in the Russia-China equation; the tables have turned now