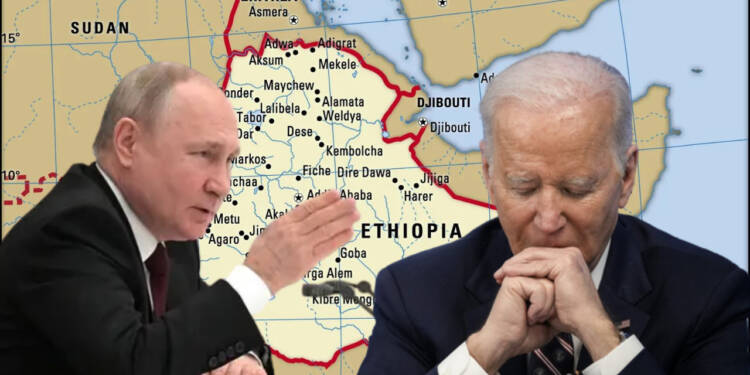 Ethiopia, Africa’s second-most populated country, has experienced military rule, civil conflict, and terrible famine in the last few years. It has risen as a key force in the Horn of Africa in recent years, enjoying rapid economic expansion and rising strategic significance in the area. But, it is also an important state that is in a tussle between US and Russia.

The US wants Ethiopia to align with the west and isolate Russia. While Russia is adamant about its influence over the African continent. Recently, the US proposed the “Countering Malign Russian Activities in Africa Act” that was tabled by Congress. This would allow State Department to “regularly assess the scale and scope of the Russian Federation’s influence and activities in Africa that undermine United States objectives and interests”

So, the US would be responding to its rival through these “democracy”-driven programs. But, Ethiopia has thwarted the intention of the United States. The nation wants to continue its relationship with Russia.

Won’t allow the US to legislate our relations: Ethiopia

The Ethiopian Ambassador to Russia has ripped US’ proposal and stated that it won’t allow the US to legislate its relationship with Russia. So, Ethiopia will be boldly stretching its strategic partnership.

This is all the more astonishing given that the US launched the TPLF-led Hybrid War of terror against Ethiopia as retaliation for its balanced foreign policy, despite the fact that the conflict failed to erase Ethiopia’s independence.

Ethiopia considers that Ethiopian-Russian relations are mutually advantageous and aimed at speeding up the emerging Multipolar World Order, which will benefit the great mass of humanity living in the Global South.

Furthermore, it wants to set an example for African nations. The ambassador states that “We are an independent country that can decide on our own issues. This position is in line with international law and aimed at pursuing his country’s objective national interests.”

The depletion of relations

The US and African relations have depleted over time. This new bill that was introduced in congress indeed expresses US’ desire to throw Russia away. The bill does address the relationship between Moscow and military governments in Sudan and Mali, specifically.

U.S.-Africa trade continues to slump from $142 billion in 2008 to just $64 billion in 2021. While Africa’s relationship with China has triggered unbalanced and has sparked repeated regional protests, Russia remains a good friend and ally for the African nations.

African nations believe that they have been used by the West and are becoming blockades for their development. The continent lashes economic reforms by institutions such as the International Monetary Fund and World Bank as the main reasons behind underdevelopment in African countries.

When it comes to Ethiopia, President Abiy has repeatedly slammed the United States and cited the history of US-Ethiopia relations to obstruct the US, pointing to Washington’s inclination to tolerate internal repression and abuse during the TPLF’s reign of terror to cast doubt on US motives.

African citizens and governments find Russia a much better alternative to the United States. While, the US talks of bringing peace to Africa, Africa believes the US itself incites the havoc in Africa.