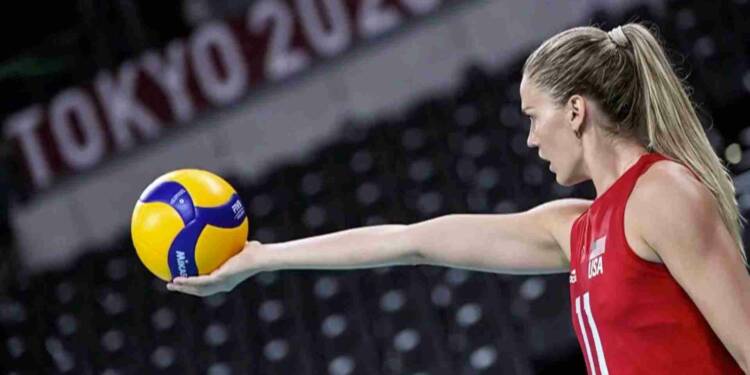 Born on October 16, 1986, Jordan Larson is a three-time Olympic medalist and former American volleyball player. With the national team, Larson earned gold in the 2014 World Championship. She won Gold in the Rimini Volleyball Nations League and the 2020 Summer Olympics in Tokyo. In this article we are going to talk about the biography, career, notable works, and family of Jordan Larson so read the article till the end.

Her first collegiate coaching position was as an assistant coach for the University of Texas women’s volleyball team in January 2022.

In 2009, Larson joined the American women’s national team. In her debut season, she started 19 matches in the Pan American Cup, FIVB World Grand Prix, and NORCECA Continental Championship, averaging 2.73 points and 1.06 digs per set. She was a member of Dynamo Kazan as well.

In 2010, Larson started each of the USA’s seven Pan American Cup games, and the team took home the bronze.

In the FIVB World Grand Prix the following year, Larson started 13 of 14 matches and contributed to the United States’ second-place finish.

She averaged 3.10 points and 1.70 digs per set at the FIVB World Cup, helping the United States win the silver medal and secure a spot in the 2012 Summer Olympics.

She gave her team the winning margin in their semifinal victory over VakfBank Istanbul in 2016. By successfully defending their title in the Philippines during the 2016 FIVB World Club Championship in Manila, they went on to become the first club in the world to win the competition back-to-back.

Larson earned a degree in communications studies from the University of Nebraska in 2008.

Prior to getting divorced, she was wed to Luke Burbach; now she is wed to David Hunt, head coach of the Pepperdine Men’s Volleyball team. On August 21st, 2021, Larson and Hunt were married in the Los Angeles vicinity.

She took home her second indoor USA Volleyball Female Player of the Year trophy in 2016. She received the bronze medal and the Best Outside Spiker award at the 2017 FIVB World Grand Champions Cup.

Larson received an invitation to take part in the inaugural season of the Athletes Unlimited Volleyball USA professional competition. With 4,569 aggregate ranking points, Larson earned the title of MVP and became the first volleyball champion ever given.

Larson was selected on the 18-player FIVB Volleyball Nations League roster in May 2021. That took place in Rimini, Italy, from May 25 to June 24. Prior to the July Olympics in Tokyo, it was the only significant international competition. For the third consecutive year, the USA took home the gold medal.

She retired from all types of games and currently serving as an assistant coach for the University of Texas (women’s team).

Who is Jordan Larson married to?

She is married to the head coach of the Pepperdine Men’s Volleyball team David Hunt.

She also made history by becoming the first and only athlete to win the FIVB World Club Championship three years in a row (2014-2016).

We hope this biography article of Jordan Larson will be helpful for you to understand her journey and works.