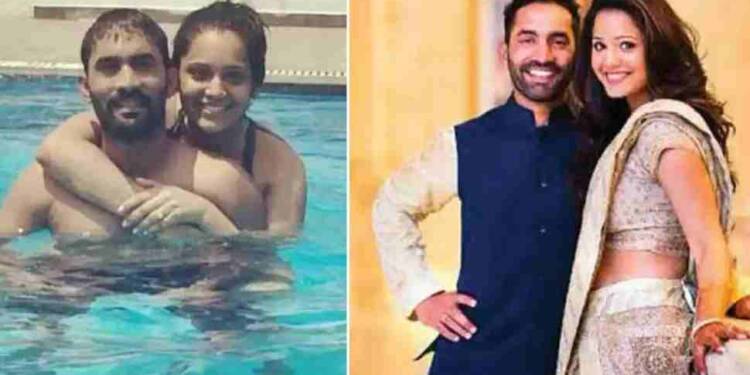 In the PSA Women’s rankings, she is the first Indian to crack the top 10.

The love story of Dinesh and Dipika

Dinesh Karthik discovered true love in 2015 when he met Indian squash star Dipika Pallikal after being betrayed by his first marriage. According to reports, they trained with the same trainer.

Deepika used to despise cricketers because she thought the level of attention and celebrity, they receive eclipsed that of other athletes.

Karthik, however, proved her incorrect after a few meetings, and the two fell in love and began dating. Both got married in August 2015.

Dipika Pallikal Karthik is an pro squash player and she played so many games for state and India this biography article is incomplete without talking about her career. So here you will gain info about her achievements and life story.

Deepika started working professionally in 2006, however, her career originally saw ups and downs. After her brief training stay in Egypt at the beginning of 2011, she improved her consistency and began turning in winning performances.

By winning the Orange County Open in Irvine, California, in September, she secured the first of three WISPA titles she would earn this year. She won another WISPA tour tournament, giving her a second victory in the country.

She finished third at the Crocodile Challenge Cup in Hong Kong in December 2011 and moved up to number 17 in the world rankings as a result. But it was her performance in the World Open that propelled her to fame. She received a top-eight finish.

The Indian women’s squash squad, which competed in the 2012 Women’s World Team Squash Championships, relied heavily on Deepika Pallikal. India, the tenth-seeded team in the competition, successfully overcame the higher-ranked Netherlands and Ireland. In the competition, she defeated competitors like Madeline Perry. Another important member of the Indian starting lineup was Joshna Chinappa.

When Dipika Pallikal won three WISPA tour championships in 2011, she shot to fame. In December 2012, she made it into the top 10.

When she made it to the final of the Tournament of Champions squash match in New York in January 2012, she became the first Indian to ever reach the summit battle of a Silver tournament.

She took it a step further in August of that same year, being the first Indian to ever make it to the semifinals of the 2012 Australian Open, a gold event.

She entered the top 10 in December 2012 after reaching a career-best position of 10.

In 2012, she became the first female squash player to get India’s second-highest sporting honour, the Arjuna Award.

By virtue of her victories, she achieved a ranking of 14 in February 2012, surpassing the former best world ranking achieved by an Indian—27th by former national champion Misha Grewal in 1995.

She competed for India’s women’s team, which won the gold medal at the South Asian Games in February 2016.

She participated in the Indian Women’s team that won the silver medal at the Asian Team Championship in Taipei in May.

Pallikal Karthik played under her marital name, Pallikal, beginning with the 2016–17 PSA Season in August 2016.

Prior to 2016, she went by Pallikal. She continued her strong play by winning the Australian Open, her 11th PSA title, in August 2016, following her second Indian national victory.

We hope this biography article of Dipika Pallikal Karthik will be helpful for you to understand her journey and works.