Russian threat knocks at the gates of Canada 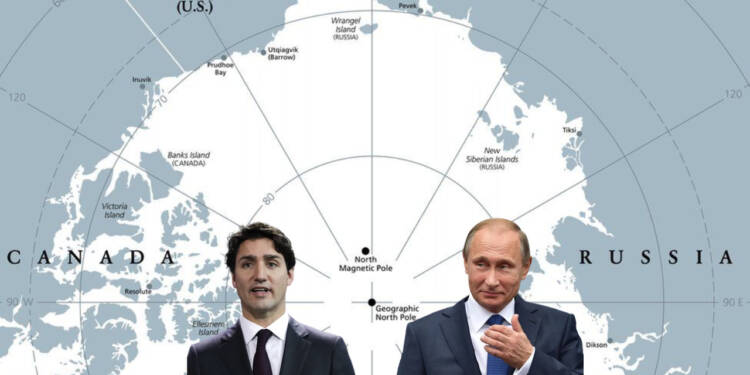 Since the start of the Ukraine war, the US has weaved a compelling design to annihilate Russia on the global stage. Embarking the US line of diplomacy without any second thought was the prime minister of Canada Justin Trudeau. Trudeau preaching high morality reeks of hypocrisy with the ‘truckers protests’ to vindicate the same. But nothing could stymie his high morality approach when it came to Ukraine. Moreover, Trudeau would upset the apple cart if he doesn’t abide by what his master commands from the Oval office.

Even while fiddling with a vulnerable military force, the high morality notion opted by Trudeau forced Canada to give away the redundant leftover in their arsenal to Ukraine in the form of military support. The US was pleased with Ottawa’s charity but this grateful deed made it certain that Canada will go military-less in the near future. Canadian armed forces have a total strength of just 67,000 personnel. Only a small fraction of these forces are trained for combat and warfighting.

Apart from occasional sojourns to Afghanistan and Iraq under the aegis of NATO, the Canadian military has no serious experience in the climate of war. Warfare is alien to the currently military-less Canada, and even Japan, a much smaller country with a Pacifist Constitution, has a bigger military force to gloat about.

Straight to now, things are not the same anymore as many expected in February. The utopian dream of Ukraine winning the war is shattered. The US and its close range of allies are nowhere in the picture supporting a battered Kyiv. Whatever be the case, Putin is a flaneur who likes to observe the happenings, and now when the storm is kind of settled, it is payback time.

Vladimir Putin has reignited his interest in the Arctic and it is now gripping the political elites in Ottawa.

“Vladimir Putin has been acting increasingly irrationally,” said Mr Leblanc, who for years oversaw troops and early warning systems in Canada’s northern territories. “When an enemy starts to act irrationally, you need to make sure the defences of your own country are up to par. In the Canadian Arctic, that’s a problem – we haven’t done enough.” Retired Canadian colonel Pierre Leblanc was quoted.

Leblanc’s warning has evoked a clime of concern in Canada. With a hapless military in hand, Canada won’t match the Russian might, let alone fancy a war. Moscow in the meanwhile has found the room to establish its base in the Arctic by constructing at least 13 new military airbases, some of them on the site of previous bases from the Soviet era.

In addition to conducting operations with long-range Mig-31BM Foxhound interceptors and Tu-22M3 bombers from these bases, Russia has also stationed long-range S-400 and medium-range SA-17 air defence systems and Bastion-P anti-ship missiles in the Arctic as a repartee to Canada’s high morality stance in the Ukraine war.

So how will a military-less Canada fight this big fight?

Knowing well that his high morality stands no chance in front of an irate Putin, Trudeau is investing $4.9 billion Canadian (US$3.8 billion) over the next six years to modernize North America’s ageing defensive system known as North American Aerospace Defense Command or NORAD.

The new funding will include plans to build new radar networks to detect threats coming over the Arctic, as well as command and control systems, advanced air-to-air missiles, and others.

What Canada is pouring for the redemption of NORAD won’t sit well with the US-defined standards. Talks are making the rounds about the paltry sum invested by Ottawa for countering the Russian influence in the Arctic and the broader picture shows how the US can easily ditch Canada since Washington has another Gordian knot to untangle itself from Russia and that is Alaska.

The narrowest distance between mainland Russia and mainland Alaska is approximately 55 miles. Alaska is one of the most resource-rich states in the United States, with billions of barrels of recoverable oil reserves. Alaska’s untapped oil has got Biden salivating as the US president is looking for a possible alternative from Russia following the energy crunch that doomed the recent months. Meanwhile, Putin’s troops have entered the base of the arctic. Russian Navy is also highly active in the Arctic, due to its geographical proximity and its long-standing nuclear doctrine of relying on under-ice patrol routes and launch stations for its nuclear deterrent submarine fleet.

Adding all these together, the US may distance away from its support for Canada. For Trudeau, it is a floating crisis all over. The Arctic is becoming an increasingly important area for global trade and with the picture getting more clear, no NORAD will stop Putin’s run.