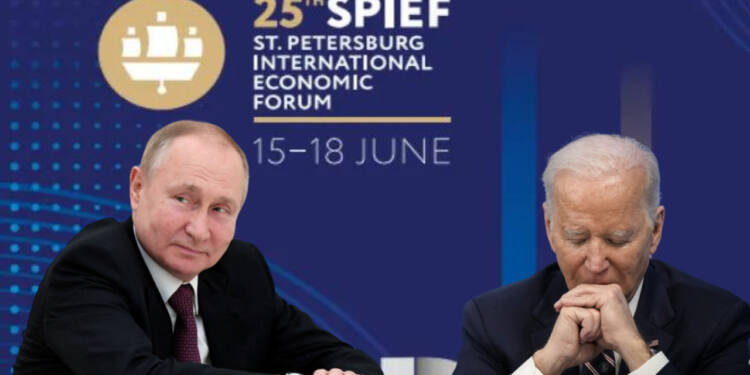 The 25th edition of the Saint Petersburg International Economic Forum (SPIEF), titled “The New World & the New Opportunities” took place amid rising political and economic turmoil. Global shocks resulting from the pandemic and growing geopolitical tensions have created a new reality. SPIEF 2022 has been attended by about 14,000 people representatives from 130 countries including US.  Even at a time when the country is at war with Ukraine the Russian-led forum SPIEF, is being trusted more than the West-led World Economic Forum.

Saint Petersburg International Economic Forum is gaining credibility on the global stage. This is evident from the fact that even the countries designated as ‘unfriendly nations’ have also participated in the forum. “Among those taking part [in SPIEF] were also representatives from all, as we call them now, unfriendly countries. Of all without exception,” said Anton Kobyakov, an advisor to the Russian president and the SPIEF organising committee’s executive secretary.  Well, not just this but 600 Americans also came forward to participate in the forum.

Kobyakov suggested that SPIEF 2022 has been attended by about 14,000 people, representatives from 130 countries, including Russia. Of which, 79 countries sent official representatives.

Nearly $100 billion worth of deals were signed this time at Saint Petersburg. During the four-day event, more than 690 deals were signed. Amid all this, what’s worth noting is that despite the tense political situation regarding Russia’s military operation in Ukraine, officials and businessmen from more than 130 countries took part in the SPIEF forum this year, including all the ‘unfriendly states’ that have imposed sanctions on Russia. This week’s 25th SPIEF resulted in 5.6 trillion rubles ($97 billion) worth of agreements, which is 30% more than the past year (3.8 trillion rubles). The business program of the forum included 214 events and focused on Russian and global economic and social issues, and technology.

According to Anton Kobyakov, the forum showcased ‘economic sovereignty’ of Russia while highlighting the importance of the platform on the international level. “It seems to us that the most important thing SPIEF demonstrated was Russia’s self-sufficiency and economic sovereignty” and the country is not susceptible to “external pressures and blackmail,” Kobyakov said.

Among the major deals signed at the forum, this year was a technical agreement on gas supplies between Russia’s main gas exporter, Gazprom, and China National Petroleum Corporation (CNPC).

Gazprom and KazaqGaz agreed to increase the processing of Kazakh gas in Russia. NOVATEK also announced its plan to build a mini-plant production of liquified natural gas (LNG) at its plant in the city of Togliatti in western Russia. Rosatom signed an agreement with Yakutia on the construction of a pilot mini-nuclear power plant, to be commissioned in 2030.

Read More: Iran cuts off the last oil supply line to the US and the West

SPIEF has an edge over the World Economic Forum

Taking place even amid already increased political and economic turmoil, the forum had a horde of participants which proves its burgeoning credibility and the reliability of the investors in the forum. The attitude of the investors and businessmen is shifting from the World Economic Forum to the Saint Petersburg International Economic Forum.  Representatives from over 130 countries and even from the ‘unfriendly nations’ is a favorable indication for the forum.