Biden is pitting Kurds against Kurds 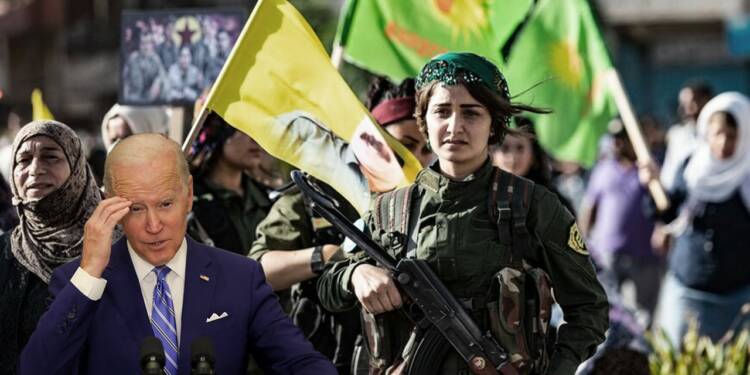 Moving away from the familiar precedent, now it’s Kurds vs Kurds in the middle east. It is a known fact how the legend of Barack Obama ensured Syria go into the history books as a country that can never unbuckle itself from the grip of war. The United States is omnipresent in Syria and whatever goes crashing in the war-torn country has got the imprints of Washington.

The PYD, PKK, and PJAK are members of the Kurdistan community’s union (KCK). The common ideology of all circles around what PKK pursues. While PKK makes the call in the northern Iraq province, PYD goes in coalition with SDF in northern Syria.

Northern Syria recently occupied its space in media for some big goings. The United States recently lifted the infamous Caesar sanctions from the northern part of Syria which is under SDF hands. This has given shudders to Turkey since a dominant SDF could make Ankara’s intrusive calculus safely go to drains. SDF from then has reinforced in quite some measure accentuating its power in the terrain far from Assad’s reach.

Traditionally SDF is strong in pacts with PKK. But the recent spate of happenings has cut a wedge in that bonhomie. The leadership of the Kurdistan Workers’ Party (PKK) has recently amplified its critique of the Autonomous Administration of North and East Syria (AANES), and in particular of the commander-in-chief of the Syrian Democratic Forces (SDF), Mazloum Abdi.

SDF espouses an approach of leniency towards Washington and they call it ‘pragmatism.’ On the opposite run, Aldar Khalil, the main PKK-leaning figure within the PYD, adopts an approach that is at crossroads with what SDF preaches.

PKK has triggered critiques at SDF for their over-reliance on USA. The northern Iraq-based group wants their Syrian allies to have sincere talks with Damascus rather than falling prey to the ruse propagated by the west.

The divergence between the Kurd forces has even aired rumours about the replacement of Mazloum Abdi with Mahmoud Barkhadan in the SDF. In Syria, a considerable section of the populace is reluctant toward the ideology purported by PKK. People sided with PYD (an ally of PKK) only to eradicate a far greater enemy in al-Qaeda and ISIS.

Straight to know, the Kurdish parties stand in factions over the pragmatic approach employed by the SDF and the traditional approach taken by the PYD (PKK ally).

Mazloum Abdi of SDF follows an approach that is cloaked with pragmatism. He intends to mend ties with Washington that could help burgeon the economy in the autonomous northern region of Syria. But following a different path goes the PYD. They see an optimal solution in giving a supportive hand to Bashar al Assad. PKK follows a rabid leftist doctrine that any given day supports an armed resistance over pragmatism. Moreover, the realities of 1970 are yet to fade among the cadres of the northern Iranian front. The role that the US enacted in the capture of PKK leader Abdullah Öcalan in Kenya in 1999 makes it impossible for the PYD to render its support to the West.

The US involvement in Iraq is zilch, while Washington is seen day in and out helping SDF forces in Syria to accentuate more power to fight invading forces. From the PKK angle, it is downright insulting and US has not made any concrete step in Iraq while collaborating with the SDF/AANES ignoring the PKK’s “significant impact” on the gains by the PYD/SDF in northeast Syria.

Another issue that was shrouded for a long is the oil deal signed between the SDF and an American firm named Delta Crescent Energy LLC in the summer of 2020. Cemil Bayık of PKK criticised this agreement, stating that Syria is a “sovereign and internationally recognised country, and nobody can own the oil as it belongs to the whole Syrian society.”

Abdi’s growing popularity and the US dictating terms with SDF whilst not lending any support for PKK’s fight against Turkey in the Sinjar region of Iraq has tinctured a colour of hate within the old guards of PKK. Currently, the scenario in Syria is taking a route of collision between the two old friends. The US could fuel this fight or end this on an amicable term. Considering the US approach, the former is a possibility.

Albeit this quarrel within the same roof, the game will invariably play into the hands of a salivating Turkey. Ankara can embolden its clout by making the most of the moment. The current skirmish within the Kurds happens to be a boon to Ankara, needlessly gifted by Washington.