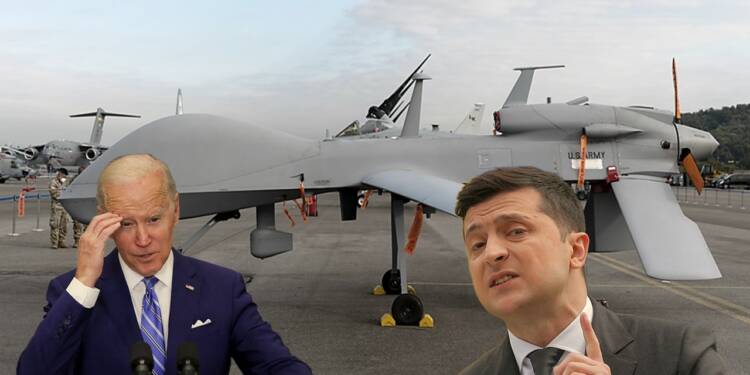 The United States President Joe Biden has plans to sell MQ-1C Gray Eagle attack drones to Ukraine, as the US believes these drones could help Ukraine in tackling Russia. The deal still needs to be approved by the Congress.

Though it would take months before the Ukrainians could fly the Gray Eagles due to the amount of training required. The Ukrainian Military is already divided over whether the drones should be accepted or not, this divide is between the higher officials and front-line airmen.

As Joe Biden considers supplying Kyiv with Gray Eagle drone systems that were quite common in the wars of Iraq and Afghanistan, Ukrainian military officials are tangled in a hotly contested debate over whether U.S.-provided Gray Eagle strike drones would be effective against the highly advanced Russian air defenses.

One of the pilots by the code-name Moonfish, stated, “We are not advocating for the Gray Eagles.” According to him, the general staff of the Ukrainian military is in favor of the drones. Furthermore, he added, “It’s very dangerous to use such expensive drones in our case, because of the enemy’s air defense, it’s not Afghanistan here.”

The Ukrainian Pilots are concerned that Gray Eagles would be easily shot down by advanced Russian air defense equipment such as S300 and S400 missile systems. In past few weeks, Russia has notched up its air defense on the borders and inside Ukraine, which has made Ukrainian military men uncertain about their position in the war.

The higher officials assert that, “The drones could be useful as it could widen Ukraine’s strike capabilities on the front lines.” but, there is another argument against this assertion: could the drones survives for more than a mission or two?

The MQ-1C or simply ‘Gray Eagle’ attack drones are capable of hitting explosive missiles and have a range of surveillance of over 400 KM, that’s a good thing. However, the drones can only hit targets in the range of 5 miles i.e., around 8-9 KM. This hit range is far less than the one-way Kamikaze drones that the United States had earlier provided to Ukraine.

This pushes Gray Eagle in a pretty weak position and this is precisely why the Ukrainian Pilots are concerned. “Their (Russian) defense systems are working on a more massive scale. Their early warning radars are working. Their air defenses are working. So, losing Gray Eagles is a real possibility to such a layered defense. Hence, spending $10 million on an unmanned vehicles is not worth it”, says one of the Ukrainian pilots.

Read More: Ukraine military finally admits they have no future.

The US congress is yet to allow the deliveries of Gray Eagles to Ukraine. The Ukrainian Defense forces are already hesitant about using these drones against the far more superior Russian Defense.

Even though the deliveries of these drone systems to Ukraine will take time, Ukraine has already shown that giving Gray Eagle is like a worthless help.