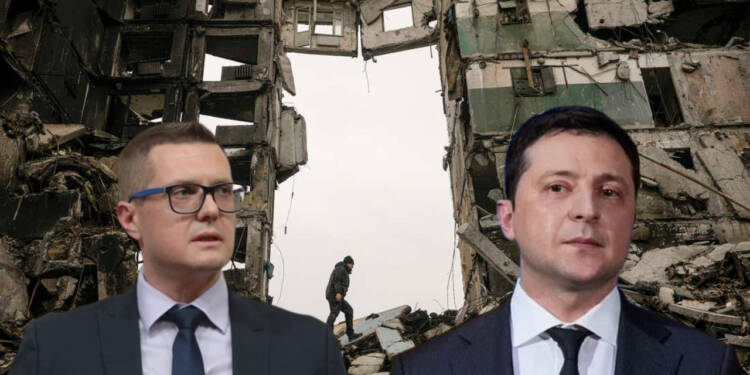 Volodymyr Zelensky, the comedian-turned-president of Ukraine has lost his war against Russia. Even the bellicose NATO, that once recklessly threw its weight behind Zelensky in press briefings and media statements, has now started to develop cold feet over supplying the embattled nation with weapons.

Ukraine’s down-and-out army is deserting, and thus questions are mounting on Zelensky’s leadership. After all, the man singlehandedly destroyed Ukraine just to fill his own coffers. So, Zelensky, like every coward leader on the planet, is hunting for a fall guy, and media reports suggest he might already have gotten one!

In a shocking development, Zelensky has accused one member of his inner circle of colluding with Russia. He is none other than Ukraine’s spy chief. In the Ukraine government’s own words, he might have passed on crucial information to the Russian forces, which resulted in Kherson falling in Russia’s hands almost immediately after the Russians attacked it.

For instance, he has blamed Col. Ihor Sadokhin, his assistant and the director of the anti-Terrorist Center for informing Russian forces leaving Crimea towards the north about the whereabouts of Ukrainian mines and assisted in arranging a flight path for the adversary’s planes.

Simply put, Zelensky’s day of reckoning has arrived, and now he has resorted to pinning the blame for his deeds on his spy chief. “We are highly unsatisfied with his job and are working to get rid of him,” a top Ukrainian official said. He added, “We are not satisfied with his managerial, you know, [skills] because now you need … anti-crisis management skills like we don’t think that he has.”

It’s perplexing to see that Zelensky is coming to realize his spy chief’s alleged collusion with Russia at this point of time, when Ukraine has already triumphed. The most baffling claim that the Ukrainian official made was that Zelensky didn’t fire him earlier because of its inevitable negative impact on Ukraine’s narrative war against Russia. The Ukrainian official said, “Zelenskyy is worried about the optics of sacking someone from his inner circle.”

So, just for the sake of “optics”, Zelensky continued to have an alleged Russia-controlled guy in his 30,000 agents-strong spy team. Just for the sake of the “narrative war”, the clown sacrificed tens of thousands of Ukrainian soldiers, who were poorly equipped and trained to fight against one of the most battle-hardened defence forces of the world.

Actually, this war was designed by Zelensky and Biden to fulfil their own interests rather than those of Ukraine. Zelensky managed to save his presidential chair, he got to ban his political opponents and fill his coffers; all because of the war in Ukraine. And now when the questions are being raised on his ability to lead the nation, he is simply looking for a sacrificial lamb. And it looks like he’s already found one in his long-time friend, Ivan Bakanov.

Conservatives had almost won the Canadian elections, but China reversed the result in the last minute