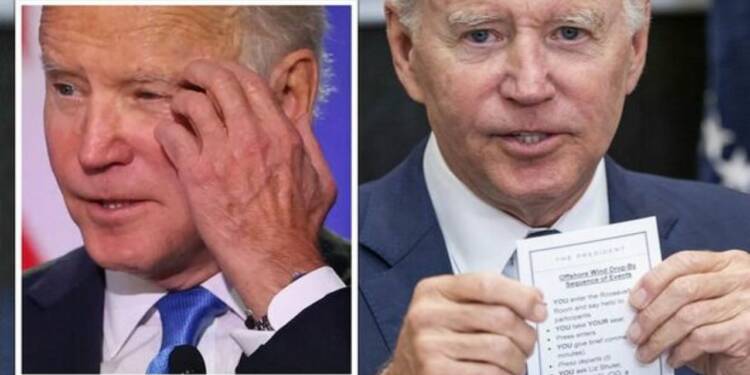 Republicans have often been seen accusing that the 79-year-old President is in a state of mental decline. Even the erstwhile president Donald Trump claimed ahead of the 2020 elections that Biden was cognitively “shot”. President Biden never gets bored of causing a communications headache for the White House. Since becoming a U.S Senator in 1973 he has been well known for his “gaffes.”

From Biden’s ‘minor incursion’ comments on Ukraine to proposing for a ‘regime change’ in Russia, he has just left his observers wondering. Perhaps, Biden is so out of loop that he’s not even aware of what the formal White House position is.

Recently, President Joe Biden was spotted inadvertently holding up a comically detailed cheat sheet prepared by some invisible forces instructing the gaffe-prone leader of the free world to “Take your seat” and to limit his remarks to “2 minutes.” At a meeting with the wind energy executives, he held the cheat sheet up backwards and an image got snapped by a photographer.

The US president attended the meeting after skipping his administration’s morning meeting with oil companies about combating record gas prices.

The document titled- “ Offshore wind Drop-By Sequence of Events” — told Biden to “enter the Roosevelt Room and say hello to participants.” Then the paper instructed, “YOU take YOUR seat.”

The typed-up note further said that after the reporters arrive, “You give brief comments (2 minutes).” When reporters depart, “YOU ask Liz Shuler, President, AFL-CIO, a question” and then “YOU thank participants” and “YOU depart.”

Read More: Biden’s next “masterstroke” to end the gas crisis in US was actually ridiculed by Obama

You see, such is the condition that the 79-year-old President is now being instructed on how to “speak”. This shows how incompetent he is for the position he is in right now. Well, this is not the first time when Biden has been spotted using staff notes at events. In another such embarrassing moment before, during a virtual meeting with governors on Friday, a photographer captured the contents of a note passed to President Joe Biden from an aide: “Sir, there is something on your chin.” The note was exposed as the president proceeded to turn the card over to take notes during the meeting in the South Court Auditorium in the Eisenhower Executive Office Building

Embarrassment has become synonymous with Biden. While the recent episode certainly made people crack up, it is also a reminder for Biden to see the harm he is inflicting on the entire country.