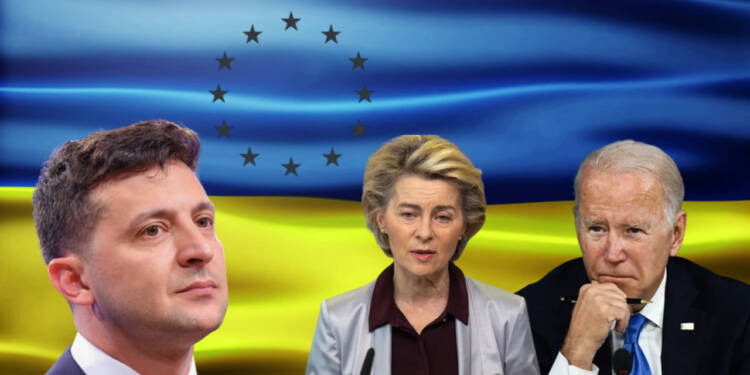 Ukraine seems to become a puppet. Earlier its strings were being pulled by the US and now the EU is all set to do the same thing. EU has granted Ukraine a candidacy status. But Ukraine has no idea what stands ahead of this move. Though Ukrainian president might take it as a victory but he seems to be totally unaware of the consequences.

“It’s a victory,” Zelensky said on Instagram. “We have been waiting for 120 days and 30 years,” he added, referring to the duration of the war and the decades since Ukraine became independent on the breakup of the Soviet Union. “And now we will defeat the enemy.”

Ukraine gets a new boss

But up until this point, the US had total dominance over Ukraine. Joe Biden, the president of the United States, has been exploiting Ukraine as a pawn in the conflict with Russia. Overall, there is no doubt that this conflict is a proxy conflict between the United States and Russia, in which Biden is using Ukraine as a puppet. The US to get its motives fulfilled has recklessly helped Ukraine financially and militarily. For instance, the US has already shipped over 5,500 Javelin anti-tank missiles to Ukraine since the Russian incursion more than three months ago.

In short, it was the United States who was the first to push Ukraine into the war and advised Western allies to extend their support to Ukraine.

Ukraine is poised to become the puppet of the EU as a result of the European Union granting it candidacy status. Although the Ukrainian government is excited by EU candidate status, it doesn’t know what lies ahead of it. Whatever the case, Ukraine’s candidacy for membership in the EU comes with a long list of stringent requirements. They will call for Kyiv to make significant steps in a number of areas, including judicial reform, individual liberties, and corporate regulations.

New set of conditions for Ukraine

The Ukrainian media, civic society, and Western allies will put tremendous pressure on the administration to implement these reforms. The EU can now intervene in the internal affairs of Ukraine in the name of revitalizing reform efforts and hence impact political decision-making within the Ukrainian government.

The EU has subjected Georgia to similar treatment. Georgia received “European perspective,” the next level down from candidate status. Leaders of the EU concurred that Georgia, a former Soviet republic, could be accorded candidate status if Tbilisi carried out measures to respect the rule of law and safeguard media freedom.

Zelensky may brag about his victory, but he must remember that his joy will only last for a little while. Zelensky, who has background as a tyrant, would undoubtedly have difficulties. He has recently made a lot of undemocratic decisions.

For instance, a Ukrainian court outlawed and seized all of the assets of the largest pro-Russian political party in the country under Zelensky’s direction after the group was accused of undermining the sovereignty of the country. Earlier, the US was using it as a pawn in its conflict with Russia, and now the EU will rule Ukraine for its own interests.

If you are a Republican, you will be denied a transplant surgery