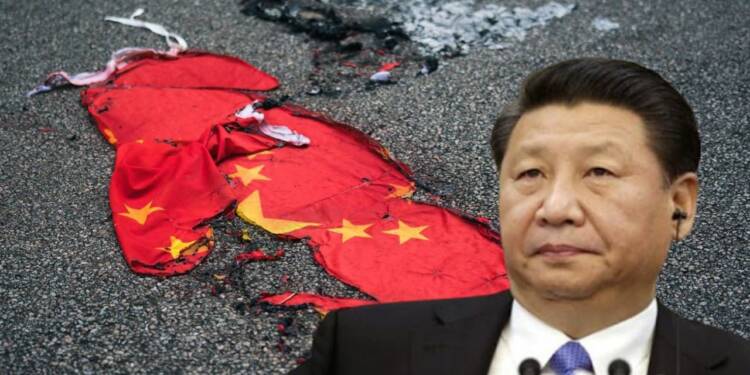 Something is clearly wrong with China and Beijing is very cautious about the unfolding events. Xi Jinping has been sailing the Dragon ship for far too long and his colleagues are starting to question his autonomy. The Chinese people are now beginning to question the acute suppression of human rights and free speech and freedom in their country.

China under Xi has been a prime example of totalitarianism with individuals getting targeted over the slightest criticism of the CCP. The oncoming of the COVID-19 pandemic enabled the Chinese regime to counter the widespread revolt in Hong Kong. As opposed to opening to the rest of the world as other nations have done, Hong Kong grew more and more dependent on China’s Covid-19 strategy of pushing for zero cases. This had enabled Beijing to encroach on the city in ways that were previously unthinkable.

Besides, the Chinese Communist Party has also been able to exert unprecedented levels of dictatorial control over the lives of Chinese citizens thanks to China’s Zero-Covid policy.

China and the COVID Excuse

China has been experiencing severe uprisings within the country due to numerous issues such as the curtailing of freedom of speech, severe human rights abuses by the CCP on the minority Uyghur Muslim community, and the issue of the special status state of Hong Kong and the sovereignty status of Tibet.

Widespread damage to life and the economy amid the COVID-19 crisis has devastated the world over the past couple of years. The efficiency of the COVID-19 fear to demotivate the rebellious groups have been excellent and this trend has been noticed by Xi Jinping.

You see, in order to quell uprisings, Xi has been advocating for a “Zero Covid” policy. Major cities have experienced “hard lockdowns,” coerced mass testing, border controls, travel restrictions, severe quarantines, extensive surveillance, food hoarding, and numerous other such arbitrary actions. In addition, the CCP has even defended its “Zero Covid” policies, touting it as something imperative for the Chinese populace. Why would they not? Under the guise of safeguarding them, Xi has begun to control the populace, something the CCP is infamous for doing.

Infighting At The Highest Levels Of The CCP

The Chinese Center for Disease Control and Prevention (CDC) previously rolled out a study on the COVID-19 epidemic that signals infighting between the CCP. According to the report, test results on a large pool of Omicron samples pointed towards only 0.238% risk of fatality, that too in people over 60 years of age and with weak immune systems. The research itself questions the extreme blockade in Chinese towns to limit the spread of COVID. The lead author of the research Prof. Zhang Wenhong suggested the country should learn to live with the ever-changing variants.

Considering the report to be a threat to the CCP, the English language text of the report was removed on 22 June. The executive of the Princeton China Society told ET, that the CDC was obviously under pressure from the higher levels to remove the report.

The statement made by Prof. Zhang, a Chinese regime doctor, signals the awakening of the Chinese Population against its oppressive regime and is a sign of a crisis in the CCP leadership. Reports also indicate a clash between Chinese Premier Li Keqiang and Xi Jinping on the issue of Covid policy with Xi favouring the “Zero Covid” policy, while the Premier is opposed to the idea.

The weakening of Xi’s command over the CCP is the rightful outcome of the Chinese revolt against the oppressive policies of Xi Jinping and his supporters, which could lead to a regime change actually favourable to the spirit of democracy. Besides, senior members of the CCP have their own ambitions and would possibly like the departure of Xi as well.