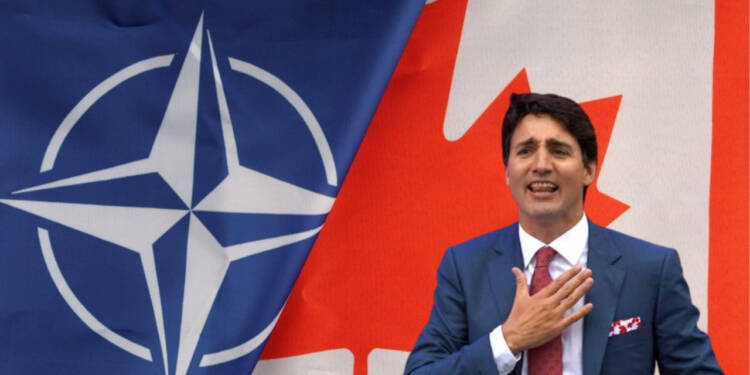 After taking the backseat in the Ukraine war, a feeble NATO assures itself that it is time to rejuvenate, and thereby goes on its new endeavor to grip the wobbly few Baltic nations. The big talks from the US seemed to have worked as Baltic nations including the likes of Estonia, Latvia and Lithuania are now advocating that NATO upgrade its presence in the Baltic.

“We need to move to deterrence by denial. We need a credible military construct on the Eastern flank that will deter Putin,” a spokesperson at Estonia’s foreign ministry said

But for all this to see light, NATO needs its allies to give their share militarily. NATO is also planning to increase troops in its existing response force to 300,000 from 40,000, and is doubling troops in the existing battlegroups in Eastern Europe, and trusted ally Canada is assigned to lead one of those battle groups in Latvia.

But, the reality can never be ignored. So is the current situation in Canada. The country is under a volley of crisis, most of it is the handiwork of the woke ideologies carried out by prime minister Justin Trudeau. And with all the crisis knocking door, Justin Trudeau is not so cool to abide by NATO’s military request, mostly for two peculiar reasons.

Even having this grip on reality, Justin Trudeau being the man Friday of Joe Biden has decided to not upset NATO forces in their Baltic mission.

The liberal government in Canada has thus decided to increase its diplomatic presence in Latvia and the Caucus, a move Foreign Affairs Minister Mélanie Joly said would help Canada combat Russian disinformation.

“We need to have more ears and eyes on the ground,” Joly said in an interview from Madrid, where she is attending a summit of NATO members this week. The diplomatic extension includes making existing offices in Estonia, Lithuania, and Slovakia into full embassies and strengthening Canada’s presence at its Latvia embassy.

After the 2018 visit to Sabarmati, Justin Trudeau seems to sport Gandhi on various occasions. Currently, he believes in soft power that could tame Russia and not violence.

“We need to do better political analysis and diplomatic outreach, but also we need to make sure that we understand the Russian disinformation they’re dealing with, and how we can counter it.” Canadian foreign ministry commented.

Read more: Germany jumped off a cliff, and now it’s saying that Canada pushed it

But why Trudeau prefers soft power is another story and a rather interesting one. NATO’s annual list of members’ defence expenditures shows Canada’s ratio of defence spending to its Gross Domestic Product (GDP) fell from 1.36 per cent last year, to 1.27 per cent in 2022. Canada is under increased pressure by the 30-member alliance of Western countries to increase military spending. Also on Wednesday, NATO Secretary-General Jens Stoltenberg said he expects Canada to increase its defence spending to two per cent of GDP.

After Biden took the helm of affairs in the oval office, Canada never allotted much to NATO’s defence as Biden always wanted the limelight to fall upon himself and never batted an eyelid about which country contributed what.

Rather It was Donald Trump who ensured that every country within NATO’s umbrella should contribute at least 2 perc of their GDP to NATO’s required defence budget. Biden’s ascension as president thus turned out to be a blessing for Trudeau, as the young leader straddled a fine line between liberalism and woke agenda caring nothing about the deteriorating Military condition.

On another note, Canada has been giving Constant mishmash to countries within Europe. When Justin Trudeau decided to withhold delivery of gas turbines to Russia earlier this month, what he expected was a pat on the back from Canada’s European allies. However, the response from Europe was the exact opposite—Canada’s anti-Russia moves ended up infuriating key European powers in epic proportions.

This accounted for Russia placing a blockade on Nord stream-1 that supplied gas to Europe.

The grotesque contribution of Canada to Europe is still running with the implications taking new shapes. It will be better for Justin Trudeau to focus more on the crisis that keeps on unfolding in Ottawa rather than feigning heroism with the European countries.