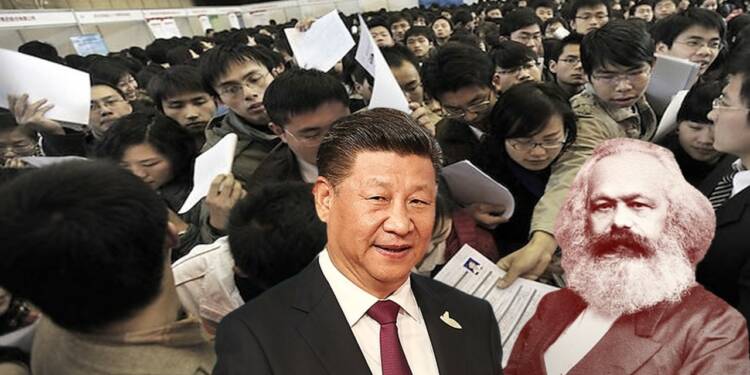 China claims to be a manufacturing superpower and maybe it was. The availability of cheap skilled labor gave the paper-dragon an upperhand in the exports of a wide range of products ranging from plastic spoons to rocket engines.

However, Beijing doesn’t really seem to play along with the “Globalization” game anymore. The severe mishandling of COVID by the CCP (Chinese Communist Party) resulted in the infection spreading to all parts of the world leading to the loss of millions of lives and collapse of entire economies. The backlash on the mismanagement made modern economies like the US and Japan to pull out their businesses from China and relocate to better locations like India.

Moreover, Xi’s attempt to curb rebellions by the use of the “Zero Covid Policy” has enabled the erosion of the trust of investors from the country. Human rights abuses in Hong Kong and Xinjiang have considerably lowered its reputation in the international markets with many countries banning imports of goods produced by employing forced labor.

In April, China’s unemployment rate among 16- to 24-year-olds, a group that includes new college graduates, climbed to a record 18.2%. That’s three times higher than the national urban unemployment rate in China, and more than the 7.9% for the same cohort in the US.

Beijing’s crackdown upon its people over basic issues are angering the Chinese citizens. The Chinese government has previously made an attempt to curb the school “Tuition” industry that was worth hundreds of billions of dollars and the loss of tens of thousands of jobs. Reports suggest that the country could experience youth unemployment similar to the levels of the 2020 COVID era amid rising Omicron fears.

Read More: Now every foreign company in China will have to hire a CCP-compliance officer

Chinese Marxism has enjoyed a swift revival and attention during Xi’s tenure. Uncoventionally, the study of Xi’s Marxism now possesses much more scope in terms of employment generation than information technology or banking.

According to Yingjiesheng, a leading job search website for university graduates, there has been a 20 per cent increase in openings that require a Marxism degree in the second quarter — the peak hiring season — compared with the same period in last year. Marxism experts are being sought by employers ranging from government departments to private conglomerates.

CCP under Xi is attempting to carry out an ideological revolution by inculcating Marxist ideologies in the minds of the populations so that they could support their country’s local and foreign policies. “The purpose of the major is to train thought police to brainwash the entire population,” said Ming Xia, a political-science professor at the City University of New York.

Before the arrival of Xi Jinping, the country was not at all focused on the inculcation of Marxist principles and rather, were advised to focused on the policies of wealth generation. Under Deng Xiaoping,  phrases like “it is glorious to get rich” got much more traction.

However, Xi has been focusing more on the creation of an “Ideologically” motivated population. Chinese universities are offering Marxism degrees to students in the philosophy developed by Karl Marx and interpreted by Xi and his revolutionary idol, Mao Zedong.

Graduates brainwashed in Marxism Ideology are performing better than their counterparts in CCP’s China A boom in academic jobs can be seen for graduates with Marxism specialization, along with better pay and benefits. Companies are also hiring in-house consultants who are knowledgeable in the field of Chinese Marxism in order to portray a symbolic solidarity with the CCP.