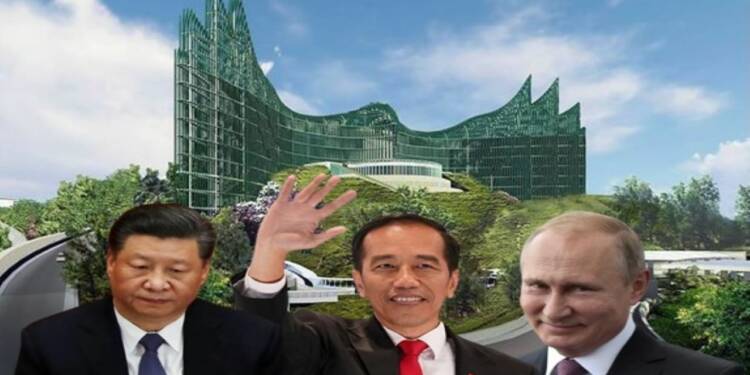 The development of a new capital city for Indonesia as soon as possible has been Indonesian President Joko Widodo’s topmost priority. He declared his intention to relocate the nation’s capital from Jakarta in 2019. Two years later, Indonesia passed a bill replacing its capital from Jakarta to East Kalimantan, situated in the east of Borneo island about 2,000 kilometres away.

The new capital city of the country will be called Nusantara. The Indonesian government has been actively looking for potential investors to finance the development of the proposed new capital’s infrastructure. The mega project has been targeted to be completed by 2045.

Indonesia and Russia have joined hands together to make President Joko Widodo’s vision for a new capital city a reality. According to a statement by the Russian Embassy, Moscow has offered Russian Railways investment in Nusantara.

Make no mistake, this is not the only shared developmental project between Moscow and Jakarta. Indonesian state-owned oil company Pertamina and Russia’s Rosneft Oil Company are also going ahead with their project to build a refinery in the Indonesian province of East Java to produce fuel and raw materials for the petrochemical industry. Furthermore, Russian energy companies are also keen to operate in Indonesia, especially in developing nuclear power. Note that, atomic energy is a key part of Indonesia’s net-zero emissions plan.

Interestingly, Indonesia has chosen to coordinate with Taiwan rather than requesting Chinese investors to bankroll the massive project. This is a major blow to China as Jokowi had made his intentions very clear that neither Xi’s investments nor his wicked plans would be allowed to enter Nusantara.

Read More: The reason why Indonesia is moving its capital from Jakarta to Nusantara

You see, Indonesia knows very clearly that Chinese investments come with invisible strings attached. Today, countries with an excessive reliance on Chinese money, such as Sri Lanka and Pakistan, have come dangerously close to bankruptcy.

Additionally, the island nation has a long history of rejecting China. Indonesians have harboured anti-Chinese animosity for a very long time. Jokowi might never expressly acknowledge it, but his actions indicate that Indonesians are wary of Beijing.

Also, trade between the two countries increased dramatically between 2013 and 2020, intensifying Indonesia’s reliance on Beijing. Jokowi is cognizant of the repercussions that such a huge dependency entails. Thus, the most sensible stance Jokowi could have undertaken was to not permit China to partake in the Nusantara project.

Allowing China in defiance of the will of the people would have resulted in a harsh backlash against Jokowich. Therefore, it is very possible that Jokowi purposefully declined Chinese invitations to enter Nusantara.

The ‘Nusantara Project’ has also formed dark clouds over the Chinese-funded 142-km rail link between Jakarta and the city of Bandung in West Java. Concerns have been raised that the profits would fall drastically due to the formation of the new capital.

Read More: Indonesia wants to build a new capital city. Problem is, it doesn’t have money

Don’t be mistaken, there looks no chance for Beijing to enter Nusantara as Indonesia has openly called for China-hawk nations such as Taiwan to help build the new capital. Nusantara is an ambitious project for Jokowi. He believes that the city should be “a driver of Indonesia’s economy in the future,” and giving the driver’s seat to China could have crashed the Indonesian economy.