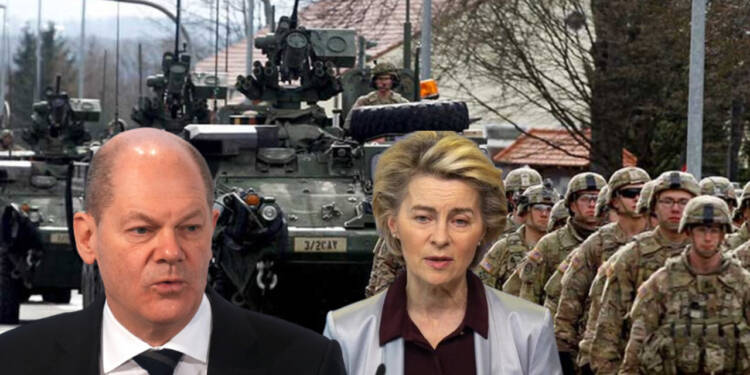 Last week, it became starkly clear to the world, that who was actually behind the Kalinigrad blockade. It was widely reported in media that Lithuania, pressed by EU’s sanctions on Russia, had imposed a blockade on Russian freight passing through the rail corridor via the Baltic state.

Till now, only the Baltic nations were forcing the EU to make Kaliningrad an exemption from its sanctions on the Russian economy. But now, their voice has got the support of a big gun in the bloc. The big gun is none other than Germany.

Germany lashes at the Commission

Germany has openly lashed at the EU for making Kaliningrad a major point of concern for the bloc and this time their disagreement is pretty serious.

The German government is reportedly concerned by the blockade of sanctioned goods from mainland Russia to its exclave, Kaliningrad via Lithuania, Der Spiegel magazine has reported. The magazine furthermore went on to claim that Olaf Scholz’s government is concerned that due to this mistake, Russia could open up a new front against the EU.

Del Speiger has furthermore claimed, “Right now, the German government is exerting pressure on the [European] Commission to ensure that the sanctions don’t apply to Kaliningrad.”

The information was provided to the magazine by an anonymous Lithuanian official. But, why is Germany so bothered about the Kaliningrad issue? Is this all a good gesture by Olaf Scholz?

Absolutely not, Berlin fears that German soldiers could end up in a military conflict and let themselves be intimidated by Russia.

The German Chancellor Olaf Scholz is concerned that Moscow could use its military wrath to secure a land corridor through Lithuania unless the blockade is lifted. This land would be secured over the sacrifice of German Soldiers.

For those who don’t know, as a part NATO military alliance, Germany has around 1000 soldiers in Lithuania. Furthermore, the German government announced plans to send 500 more troops to Lithuania last month.

Now, the German chancellor is clearly stressed that the lives of its own soldiers are at risk. And it’s a fact, the Baltic states being a NATO member, that scenario would mean a direct military offensive between the NATO military alliance and Russia.

And the German chancellor has frequently stated that he wants to prevent NATO from getting involved in the conflict in Ukraine. Russia has already warned the bloc that Lithuania’s actions as a “blockade” of its region, are surely going to bring hellfire.

As the European Union is already chalking out a plan to defuse the tensions, Germany’s statements make this very clear that eventually, the EU may have to back off from its evil intentions of opening a new front against Russia.

Germany is very clear that despite knowing the repercussions of the move, the EU tried opening a new front against Russia and this has pushed German soldiers to a really vulnerable position.

Now, will the EU remove the blockade ahead of the EU summit poised on 10th July, or will it up its ante against Russia by making German soldiers war fodder, only time will tell.